The announcement was made at exactly 8: 30pm Nigeria time (GMT+1) on Friday, January 10, 2020 by the Publisher of the newspaper, Rasheed Abubakar.

Erdogan is clinching this prestigious award for the second consecutive time.

Recall that he was named the 2018 Global Muslim Personality of the Year by the same media outfit for the influence and power he wields both across the Muslim world and within the international community.

Recall that the 94-year-old leader was in 2018 named the second runner-up during the maiden edition of the prestigious award, celebrating Muslim leaders globally.

The Publisher, Mr Abubakar said that Erdogan was considered worthy of the award for the second consecutive year due to his consistency in standing up for Islam and the oppressed Muslims globally.

According to him, “The management of Muslim News Nigeria hereby confers Mr Recep Tayyip Erdogan with this noble award for the second time because of his enduring commitment to the emancipation of oppressed Muslims in Palestine, Myanmar, Kashmir, Syria and other countries of the world.

“Erdogan is among the few Muslim leaders to have identified with and regularly expressed concerns about the excruciating and harrowing situation of Uighur Muslims who are being persecuted by the Chinese government and we, at Muslim News believe that the challenges facing the Muslims in the eastern Xinjiang province will soon become a thing of the past if other Muslim leaders across the globe unite and work together.

“In the same vein, Erdogan has made giant strides in making Turkey an Islamic epicentre and a scientific hub; an emerging global power – providing Muslims across the world with alternative leadership.”

“As the incumbent President of Turkey, Erdogan has not only used that position to reposition Turkey on a socio-economic development standing but also pursues assiduously, the interests of Islam and the Muslims on the global scale.”

More so, Mr Abubakar noted that Erdogan has always been at the forefront of actualising unity and collaborating with other regional powers among Muslims across the world, through various fora including the December 2019 Summit of Hope held in Kuala Lumpur, Malaysia.

Abubakar quoted Erdogan as saying, at the Summit, which also had in attendance the Emir of Qatar and Iran’s president Hassan Rouhani that “The biggest problem facing Muslims on a global scale is the lack of implementation on joint policies as Muslim nations remain fragmented and plagued by sectarianism.”

He is also renowned for championing the struggle against labelling Islam with terrorism from the early stages of his political career. This undoubtedly led him to being slammed with a political ban in his formative political years as Mayor of Istanbul.

Consistently and unrelentingly, he has served as a voice for the voiceless and oppressed Muslims, with special reference to Palestine, Myanmar, Kashmir, Syria and a host of others,” he said. 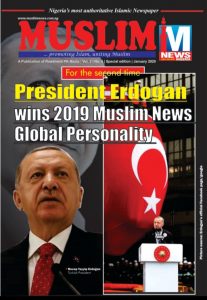 Mr Abubakar, who is also an author of many books on Islam and Media, congratulated the Turkish President on his successful re-emergence as Muslim News’ Global Muslim Personality of the Year, saying, it is a well-deserved award considering his giant strides towards the interest of Islam.

Mr Abubakar advised the man who has been described by many as the Amirul Mumuneen (the leader of the Muslim world), to continue with his bold steps in ensuring that every Muslim across the world finds justice against persecution and make Islam rule the world again.