A group of Igbo Muslims, under the aegis of Al-Ikhwaan FiLlahi Muslim Society of Nigeria have decried the incessant harassment and discriminatory marginalisation against their brethren in and across the south eastern region thereby calling for an end to the issues with immediate effect.

The southern group also voiced against the continuous victimisation and molestation of Muslim children in schools while upholding their constitutionally guaranteed fundamental rights.

This was contained in a communique signed by its President, Alhaji Muhammad Elunor, Esq. at the end of the group’s general meeting in Asaba, the Delta State capital.

Al-Ikhwan FiLlahi Muslim Society of Nigeria is an Islamic body which is concerned with the affairs and well being of Muslims in the South-South and South-East geopolitical zones of Nigeria.

According to Alhaji Elunor, “The discriminatory practices against the Muslims in both the South-East and South-South geopolitical zones of the country must be addressed immediately with the urgency it deserves.

“As a matter of fact Muslims in both the South-East and South-South geopolitical zones of the country, suffer discrimination in admission into Universities, appointment in public and private establishments solely on the basis of religion.

“Despite the fact that there are an overwhelming number of educated Muslims in these zones, no Muslim from the region has been appointed a minister of the country, Vice Chancellor of any University, Rector of any polytechnic or head of any government parastatal and agency.

“In a State like Edo where Muslims number over 40% of the population, the Muslims have never produced an elected Governor or Deputy Governor and since 1999, has never had more than two Commissioners at a time; just as presently, there is just one Muslim Commissioner. This is despite the fact that the Muslim population boasts of some of the most brilliant minds in the country.

“The case of Enugu State is even worse. Despite the presence of a large population of Muslims of about 12%, Muslims are not represented at all in appointments,” he emphasised. 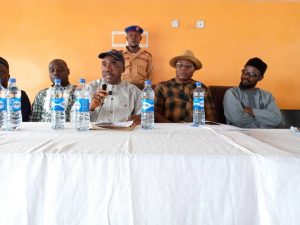 Speaking further, he said, “In the area of Education, the victimization and molestation of our children in schools must end immediately. Our Children are still being victimized and refused the use of hijab in not just privately owned schools, but also in public Primary and Secondary Schools. This should not be allowed to continue.

“Some Universities in the regions, in a bid to ensure that Muslim students fail the Post UTME exams, include Christian Religion Studies questions in their examinations. Muslim students who did not take CRS/CRK are automatically disadvantaged,” he noted.

Alhaji Elunor therefore call on the appropriate quarters to address the issues with immediate attention and urgency and stated they would ask for their rights within the confines of the laws of the country.

The president of the group further advised their members to continue to uphold the teachings of Islam, be good to their neighbours and spread the good news of their religion.