French President Emmanuel Macron asks the Israeli police to leave the 12th-century Church of Saint Anne in the old city of Jerusalem on January 22, 2020. - World leaders are to travel to Israel this week to mark 75 years since the Red Army liberated Auschwitz, the extermination camp where the Nazis killed over a million Jews. Thousands of police officers and other security forces will deploy from today, ahead of the arrival of dignitaries including Russian President Vladimir Putin, French President Emmanuel Macron and US Vice President Mike Pence. (Photo by Ludovic Marin / AFP)

French president loses his temper, says he ‘knows the rules’ at Church of St. Anne, a French territory; incident similar to dust-up with Jaques Chirac in 1996

When French President Emmanuel Macron visited Jerusalem’s Old City Wednesday, he also walked in the footsteps of one of his predecessors, Jacques Chirac, by engaging in a heated argument with Israeli security.

The altercation broke out when security personnel pushed past the French detail and were first to enter the Church of Saint Anne, which is French state property.

“Everybody knows the rules. I don’t like what you did in front of me,” an animated Macron loudly told the Israeli personnel, speaking in English, in the crush to enter the building, which remains French territory under international treaties. 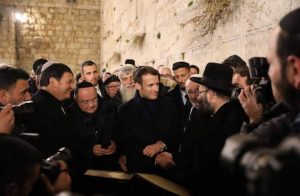 “Go out — outside please!” he added in a raised voice in scenes captured in video footage that quickly spread on social media.

The Roman Catholic church, located at the start of Via Dolorosa in the Old City’s Muslim Quarter, was offered by the Ottoman Empire to France in 1856. It is one of four French territories in Jerusalem.

The rules that have been in place “for centuries,” Macron told the Israeli officers, “will not change with me, I can tell you, okay? So everybody, respect the rules.”

“It’s France here, and everyone knows the rule,” he said, still in English.