▪︎ Call for peace, respect for the Hijab

Two Kwara State Commissioners, Alhaja Saadatu Modibbo Kawu from the Ministry of Tertiary Education and her counterpart, Alhaja Aisha Ahman-Pategi from the Ministry of Local Government and Chieftaincy Affairs, were among the top female dignitaries that graced the World Hijab Day solidarity lecture held on Saturday in Ilorin.

The two speakers called on Nigerians to respect the rights of the Muslim students and their mothers to use their Hijab in order to have a peaceful coexistence.

While addressing the audience including students from different schools in Kwara State at the fill-to-the-capacity FOMWAN Hall, Fate, Ilorin, Alhaja Modibbo-Kawu warned against violation of Muslim girls’ right.

The Commisioner noted that children should be encouraged to be as modest and decent as they can.

According to her, “the world has become different from when we were kids so it’s imperative that we should teach our children from our homes, organisations, mosques and churches. We need to teach them moral values as the society is full of vices”.

She also condemned the act of forcing women into using Hijab, saying, “We need to respect the fact that Nigeria is a big, diversified society. We need to respect each other and not force anybody into our religion and live in peace.”

Also speaking at the event, the State Commissioner for Local Government and Chieftaincy Affairs, Aisha Ahman-Pategi said that the Hijab is a symbol of value.

“Anything that has value is always covered and it takes effort to get to it. The Hijab means that we value the precious gift Allah has given us. It also makes the girl-child recognise how beautiful they are from inside out”, she said.

The Convener of the Coalition of Muslim Organisations in Kwara, Alhaja Bilkis Oladimeji from the Federation of Muslim Women Organisations (FOMWAN) called on the federal, state and local governments to support the fight for Hijab because it’s a divine right. 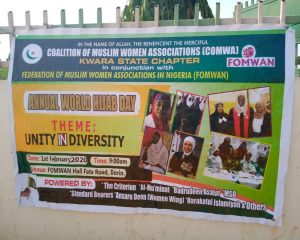 The veteran Muslim woman journalist said the event was also to encourage mothers and daughters not to allow the crave of western education to erode them away from the path of Allah.

The proprietress of Lamp Bearers Islamic School, Ilorin, Hajia Mardiyyah Oshinuga who also spoke at the event told the audience that the Hijab is not a barrier to achieving whatever they want to achieve and they shouldn’t be discouraged whenever they face any obstacle due to their Hijab.

She further warned them that the Hijab doesn’t give them licence to commit evil acts.

“The Hijab dignifies you, it protects you and empowers you. A person using the Hijab has to be respectful. The Hijab doesn’t mean you should disrespect your parents and elders.