Since the news of the failed suicide bombing at a Winners Chapel Church in Kaduna state broke, the real identity of the suspected suicide bomber has generated controversy.

Especially in this period where most terrorist activities and attacks have been associated, albeit wrongly, with the Islamic faith, critics would not expect an exemption in this case.

Almost immediately after the incident took place on Sunday and the Kaduna State Police Command identified the suspected terrorist as Nathaniel Samuel, the Christian Association of Nigeria (CAN), went to town shouting from the rooftop claiming that the suspect was of the Muslim faith with the name; Mohammed Sani.

These were the words of the Chairman of the Kaduna State chapter, Rev. John Hayab who claimed that the suspect identified himself as Muhammed Sani when he was apprehended in the Church.

Hayab claimed that, “The church was in session when the young man came in, dropped his bag and exited as if he was going to the toilet, but didn’t come back on time. Some church members became suspicious. The church had put security measures in place such that they monitor everything going on in the church and they even had CCTV cameras.

Corroborating this without investigation and seeking clarification while taking to his Twitter handle, controversial chieftain of the Peoples Democratic Party (PDP) and former Aviation Minister, Femi Fani-Kayode tweeted via his verified his handle; @realFFK;

“If anyone really believes that the individual that attempted to plant a bomb in Winners Chapel, Kaduna is a Christian and that his real name is Nathaniel Tanko, they need to have their heads examined. He is actually a Hausa Fulani Muslim and his real name is Mohammed Nasiru Sani”.

“Kaduna-based Pastor Azzaman, wrote: “The Kaduna bomb planter, Mohammed Sani confessed to being forced in detention to bear Nathaniel Tanko in custody. He confirmed he is a Muslim & Fulani. He also claims an influential Muslim contracted him to bomb the Living Faith Church Kaduna”.

Similarly, Deji Adeyanju toed the line of his associates on his Twitter handle claiming falsely that the suspect’s name is ‘Mohammed Nasiru Sani’.

“One Mohammed Nasiru Sani tried to bomb Living Faith church in Kaduna yesterday but he was caught,” he tweeted.

The suspected Christian bomber during interview with gentlemen of the press on Monday confessed to being a Christian, stating unequivocally that his name is Nathaniel  Samuel.

He debunked Mohammed Sani being attached to him while noting he ought to be a pastor at the church.

In his statements to the press, he said “My name is Nathaniel Samuel. In fact, I am supposed to be a pastor at the Living Faith Church because I attended the Word of Faith Bible Institute.

“There is no way by accident that my name is Mohammed. My name is Nathaniel,” he added.

Findings by Nigeria’s most authoritative Islamic newspaper, Muslim News, revealed that he (Nathaniel Samuel) is actually a member of the church and student of the Word of Faith Bible Institute, Lagos.

An online check through his personal Facebook account named: Nate Sam (Mc focus) created at around May 9, 2011, he presented himself as an event manager, entertainer, MC, compere, freelance OAP, hypeman and artist. 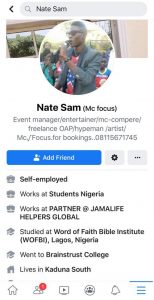 One of his last posts was a quote attributed to the late legendary Reggae star, Bob Marley, which said; “Who are you to judge the life I live. I know I am not perfect, and I don’t live to be, but before you start pointing fingers…make sure your hands are clean.