Scores of Nigerian Muslims have expressed their disappointment over celebration of Valentine’s Day in Saudi Arabia.

The Nigerian Muslim netizens who believe that the Valentine’s Day, which is being celebrated globally on February 14, is Haram berated the Kingdom saying she is no longer a model for Islam.

Adams Sulaiman from Lokoja described it as “Very unfortunate”, adding that, “That is why Saudi Arabia cannot be a model for Islam in this modern day. The Arab world is in shambles islamically. Go to United Arab Emirates and see how they embrace and celebrate the activities of the kuffar.” 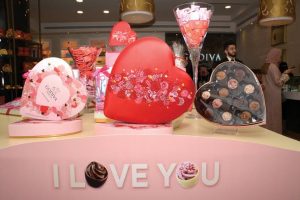 Ibrahim Jibrin from New Bussa said, If this news is true, then it’s unfortunate.Though that doesn’t change the fact that Valentine is a pagan belief and HARAAM for Muslims and so it shall remain till eternity.

Saudi Arabia’s state owned television, Al Arabiya had earlier this week reported that the Cabinet lifted the ban in 2016 and issued a decree restricting the Committee of Promotion of Virtue and Prevention of Vice, and Saudis have increasingly embraced the celebration ever since.

Saudi daily newspaper, Arab News, also listed several restaurants that allowed guests to celebrate Valentine’s Day, including one that will offer a themed menu with special arrangements for Valentine’s surprises. 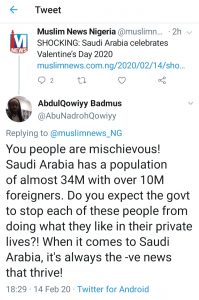 “Valentine’s day is a pagan Roman festival, which continued to be celebrated after the Romans became Christians. This festival is connected to the Saint Valentine who was sentenced to death ON 14th February 270 CE. It is not permissible for a muslim celebrate any of festivals of the kuffaar. or wishing someone. – Isa Sheu

Nigerians are a bunch of hypocrites. They behave as if they love Saudi Arabia more than the citizens. It’s obvious that the Saudi citizens and foreigners who are celebrating the Val will be laughing reading reactions from Nigeria. So absurd to say the least. If the Kingdom didn’t lift the ban, who dares celebrate it?

“The Saudi state television such as Al Arabiya and other media were the first to break the news before this medium republished it. What’s her crime? That Saudi Arabia didn’t lift ban on the Val or what? Or that the medium copied from its original source or what? They should take their anger to Saudi Arabia embassy or blast Al Arabiya if they arent satisfied with the decision of the Kingdom,” Muhammad Jamiu said. 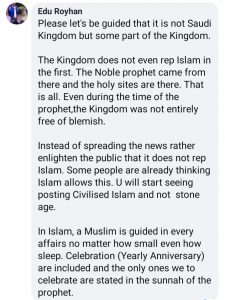