by admin
in Islam & Media, Uncategorized
0

The Nigerian media can be diabolically funny and mischievous. When Boko Haram, a terrorist group that engages in identity theft of Islam kills innocent Muslims, they will always conceal the identities of the (e.g. names and religion – Islam) of the victims.

And whenever Muslim observers decry such lopsided reports as biased and Islamophobic, the so-called human rights activists and non-governmental organisations – mostly pro-Christians – will jump to silence them, asking, uncharitably, ‘does their religion matter?’

On the contrary, when Christians fall victims, the media and these pseudo-activists blow it out of proportion with different banner headlines, falsely laying claims that ‘Christians are the only victims’ or ‘Christians are being persecuted’.

Unfortunately, neither did the fake news peddlers nor the hypocritical propagandists in the media, know they are unwittingly or deliberately providing terrorists like Boko Haram with the much needed massive media coverage to spread their messages of hate, in order to create fear in the hearts of the masses as well as the government. Neither do they know the undue publicity given to the terrorists also enables them to recruit more followers.

But the Islamophobic Nigerian media never learn. For selfish motives – some of which stem from their fear of Islamic revival – they continue to push the agenda of “only Christians are being killed or persecuted” in their reportage with statements like Boko Haram has an ‘Islamisation agenda – parroting the unfortunate cliché of wicked politicians whose only goal is to gain access to the reign of power by hook or by crook.

For the sake of this study, The Punch, a notable Nigerian newspaper, which has been described as an Islamophobic medium by the Nigerian Muslims, will be used as a case study.

The Punch hid the identities (name and religion – Islam) of the two kidnapped Muslim International Humanitarian workers, Saifura Khorsa and Hauwa Liman, gruesomely murdered by Boko Haram in all its headlines when the stories of their murder by Boko Haram broke in September and October, 2018.

The newspaper didn’t tell the world including the Nigerian Christian sympathisers and Donald Trump, the US President that those innocent ladies were practising and Hijab-wearing Muslims. What the newspaper was saying is simple, their religion or name never mattered in the headlines.  See examples below: 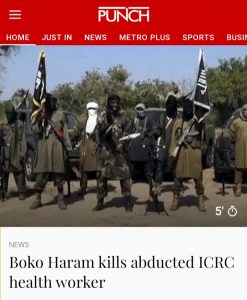 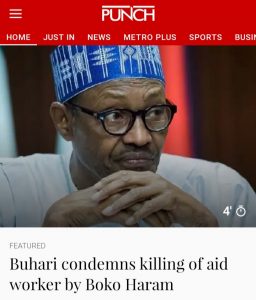 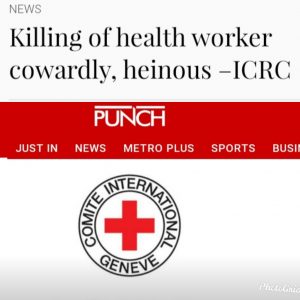 Deliberately, the newspaper didn’t use the picture of the victims either on the cover page or inside story or online image in any of the three stories above. It instead used Boko Haram leader, Abubakar Shekau and his goons; President Buhari and ICRC logo respectively.

Few weeks later, the terrorist group struck again, killed another Hijabi lady, with her identity also missing in the headlines as seen below, ostensibly in pushing its Islamophobic agenda because the murdered aid workers were Hijabi Muslimahs. 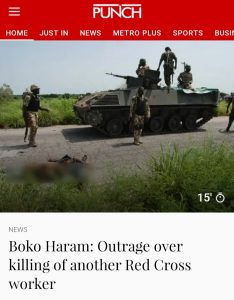 ▪︎Boko Haram: Outrage over killing of another Red Cross worker

But when Christians are killed by the group, Nigerian media becomes heavily subjective and true to type, attach religious persuasion in addition to pushing the narrative that Christians are being killed and persecuted. 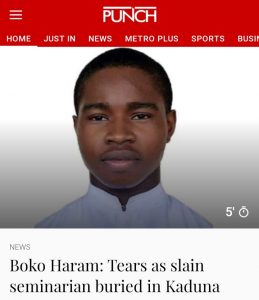 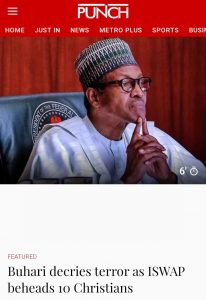 With reports of this nature, statistically, it will be easy for analysts to prove, albeit erroneously, that more Christians are being killed in Nigeria by Boko Haram. This is because over the years, prominence has always been given to the mention of religion (Christianity), religious institution (churches) and the identity (names) of the Christian victims to the detriment of Islam, the religion of the overwhelming majority of the victims who die in the hands of the terror group.

For instance, Boko Haram, which The Punch has always claimed to be Jihadists or Islamic fundamentalists (as used by the newspaper in its editorial of May 24, 2019, entitled: “Islamist terrorism: Obasanjo, Soyinka on point”) recently attacked with a bomb in Borno, killing four (4) Muslim worshippers right inside a mosque. While writing the headline however, the newspaper threw caution and media ethics to the wind as it refused to indicate that the attack took place in a Mosque. It also consciously failed to mention that all the victims were Muslims including a 12-year old child, as seen in the headline below.

Unlike multiple media reports of terrorist attacks on Mosques, there is no credible evidence or reported attack(s) on Churches by the Boko Haram terrorist group since 2016. The only exception is the recent and unsubstantiated claim by a certain Arewa Pastors group who reportedly told The Punch newspaper and some other mainstream media that the group attacked their church and killed 30 Christians 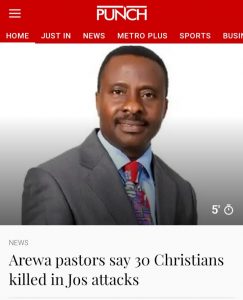 Also, when some gunmen invaded a church in Benue on Wednesday, April 28, 2018 and killed two Catholic Priests and 17 members, The Punch and other media shut down their front pages to render special reports about the heinous crimes. The Punch cover read; 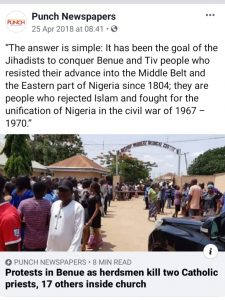 Going by the analysis, Muslim News findings showed that the subjective and biased reportage of the Boko Haram activities by a section of the Nigeria media (led by The Punch newspaper) have contributed significantly to the escalation of the attacks. It has on several occasions, divided Nigerians on religious lines. Rather than unite to condemn and fight the common enemies, they instead, pursue sectional goal and defend parochial interests having being polarised by the media. The method of reportage, through sensationalism, has also frustrated the efforts of the government, in stamping out the terrorist group completely.

The manner in which Boko Haram launches ravaging attacks on both Muslims and Christians, bombs mosques and churches, and indiscriminately abduct for ransoms should have ordinarily showed the Nigerian media that the terrorists do not represent any religious group. However, a section of the Nigerian media, based on their historical (antecedents) has always left the public in needless confusion by ascribing the terrorist group to Islam.

With this antic, the war against Boko Haram has been frustrated as it has been given undue religious colourations. Sadly, those Christians who shared the beheaded videos of Boko Haram’s victims just to justify that the group is Islamic because they sometimes utter Arabic slogan are ignorantly doing so to empower Boko Haram to do further harm.

At a time when the Nigerian populace should come together to decry the terrorist group and call it what it is (a terrorist and  criminal group), The Punch newspaper and its cohorts keep inciting  religious bigotry and divisive tendencies  by tagging the murderous  terrorist group as ‘Islamist fundamentalists’ who they claim are waging ‘religious warfare’ with the intention of a phantom ‘Islamization  agenda’.

Obviously, Boko Haram is not pursuing any Islamic agenda as Islam is alien to murder or any extrajudicial killing, It therefore behoves the media to join hands with the government in fighting this terrorist group with fair and balanced reportage rather than give their activities a generous mention with which they crave and seek to  divide the people along religious lines, thereby giving Boko Haram further opportunities to perpetrate more evil and dastardly plots.

United we stand, divided we fall.

By Rasheed Abubakar and Abdullahi Abdulganiy