Turkey kills over 300 Syria regime troops in retaliation to attack

Turkey has reportedly killed at least 309 Syrian regime soldiers and destroyed dozens of military vehicles and defence systems in retaliation for the regime’s offensive which killed 33 Turkish soldiers last night.

The revelation of Turkey’s devastating retaliation comes after it was announced by the Communications Director Fahrettin Altun early this morning that Turkey had put under fire all identified and known targets of the regime’s military in Idlib province, including their land and air vehicles.

Following the Syrian regime’s killing of at least 33 Turkish soldiers in overnight attacks, the decision was made to retaliate while an emergency security summit meeting was held at the Presidential complex in the capital Ankara to discuss the situation. 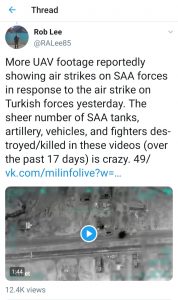 Altun said at the meeting: “The summit stressed that the [Syria’s] Assad regime is responsible for the death of hundreds of thousands of Syrians, and agreed to retaliate against the illegitimate regime which has turned its barrel against our soldiers who are on duty to protect the rights and interests of the Republic of Turkey.”

He also compared the situation in Syria’s north-west Idlib province to the genocides and atrocities in Rwanda and Bosnia during the 1990s, insisting that such an occurrence cannot be repeated in Idlib.

The province of Idlib, which is the last major opposition stronghold in Syria’s nine-year-long civil war, was originally meant to be a de-escalation or safe zone, as stated under the agreement struck between Turkey and Russia back in September 2018.

That agreement, however, was repeatedly violated by both the Syrian regime and its ally Russia who launched a campaign to recapture the city in April last year. 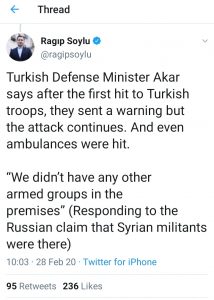 In recent months, the regime has made rapid and significant gains following the involvement of Russian ground troops and Iranian forces, enabling it to retake around half of the province so far, including key towns and cities and the strategic M5 highway.

Despite yesterday’s declared victories by the Syrian opposition when they recaptured the key town of Saraqeb, tensions have only escalated and have raised fears of further direct confrontations between Turkey and the Syrian regime and Russia.

Turkey’s suspicions of Russia’s involvement in the attack on its soldiers were ignited when it was revealed that Turkey had provided coordinates of the soldiers’ location to Russia in order to prevent them from being targeted accidentally. 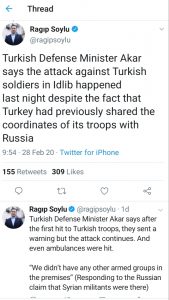 Ankara’s Minister of Defence Hulusi Akar then stated that after the first attack on Turkish troops, Turkey sent a warning to Russia but it was ignored and the attacks continued. Russia denied its involvement, but put the blame on Turkey for allowing its soldiers to be mixed in with Syrian opposition groups. Akar stated, however, that “We didn’t have any other armed groups in the premises”.