FACT CHECK: Did the US truly offer $7 million for info on Boko Haram leader Shekau

Nigerians on Wednesday woke up to news stories in local media that the United States has announced a $7 million offer for anyone with information that will lead to the arrest of Boko Haram leader Abubakar Shekau.

However, the offer was not as new as they all reported. Instead, it was republished by the newly created French Twitter account of United States Rewards for Justice Program on Tuesday.

The offer was first made on June 3, 2013, when the US listed Shekau among the most wanted terrorists in the world. Shekau is currently ranked 8th on the list.

“Since June 2013, the State Department’s Rewards for Justice program has advertised a reward offer of up to US $7 million for information leading to the location of Boko Haram leader Abubakar Shekau,” US Embassy in Nigeria said in a statement published on its website in May 2014. 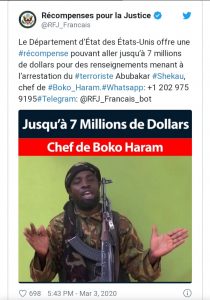 Other terrorists on the wanted list with bounty offer for their arrest include Ayman al-Zawahiri, the leader of Al Qaeda and former leader of Egyptian Islamic Jihad – $25m, Sirajuddin Haqqani, the leader of the Haqqani Network, based in Pakistan – $10m, Abu Muhammad Al-Julani – $10m, Abdullah Abdullah, wanted for his role on behalf of Al Qaeda in the 1998 US embassy bombings -$10m and Saif al-Adel – ($10MM). He is a high-ranking member of the al-Qaida organization and also wanted for the 1998 US Embassy twin bombing.

“For the first time, the U.S. Department of State’s Rewards for Justice program is offering rewards for information on key leaders of terrorist organizations in West Africa: al-Qaida in the Islamic Maghreb (AQIM), the Movement for Unity and Jihad in West Africa (MUJWA);and the groups known as the Signed-in-Blood Battalion and Boko Haram,” Office of the Spokesperson for US Rewards for Justice Program said in a statement.

The Twitter accounts for US Rewards for Justice Program which had been in existence since February 2013 tweeted a link to the statement in which monetary offer for information on Shekau was made.
The handle has tweeted the same information multiple times since then.

Here is a screenshot of the tweets: 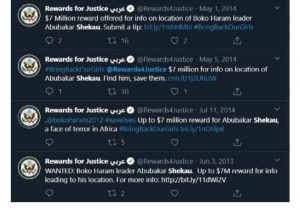  Shekau has been the leader of Boko Haram since the death of its former leader, Mohammed Yusuf, in 2009. The terror group has since then split into factions with different cell leaders.

Shekau was rumoured to have been killed in 2009 but reappeared as the group leader less than a year later. The Nigerian army in mid-August 2016 stated that he was fatally wounded when soldiers raided a base of Boko Haram in Sambisa forest.

The terrorist group has killed over thirty thousand people and displaced more than 2 million persons from their homes.

“Boko Haram is largely responsible for numerous attacks in northern and northeastern Nigeria that have killed thousands of people since its emergence in 2009 and conducted high-profile kidnappings of Westerners in the Far North Region of Cameroon,” US Embassy in Nigeria said in a statement published on its website.

In 2013 alone, the US Embassy said Boko Haram carried out kidnappings, killings, bombings, and attacks on civilian and military targets in northern Nigeria, resulting in over 1,000 deaths and injuries.

“Boko Haram primarily operates in northeastern Nigeria, Cameroon’s Far North Region, and the Lake Chad Basin, and receives the bulk of its funding from bank robberies and related criminal activities, including extortion and kidnapping for ransom,” US Embassy said.

Boko Haram’s activities have remained largely uncurbed in northern parts of Nigeria despite the government’s multiple claims that the terrorist group have been ‘technically defeated’.