Idem Ogwa village, Mbatolu Local government and Shell Camp Mosque, Owerri, Imo State will be agog on Friday, 10th of April 2020, for what will be considered to be the first Igbo-themed Islamic nikaah (wedding) between two Muslim converts, Nurudeen Nicholas Ikeocha and Aishat Ugochi Obi.

Two loverbirds, who recently embraced Islam will be tying the nuptial knot in an Islamic ceremony to be conducted by leading Islamic scholars from eastern part of Nigeria.

Muslim News revealed that they will be allowed also showcase their rich Igbo culture since shariah has not prohibited such as long they do not contradict the dictates of Allah.

Our correspondent also sighted the nikaah IV of the couple-to be with the dedicated hashtag #AishaNuru which has a beautiful toast that goes thus:

Love is a gift from Allah. It knows no boundary. With Islam as our bound, Our lives shall cross all boundaries till Aljannah Firdaus.

According to a user on nairaland, many think all Igbos are Christians but the news needs to be told to show that it is untrue as there are some who are Muslims.

“There has been this notion that Igbos are all Christians. Well I present to you, the first open Igbo Muslim marriage. Igbos are known to be very accommodating.

“Many have had this erroneous belief that Igbos don’t have Muslim brethren but in fact, many Igbos have held many positions in the Islamic arena,” he said.

The user went on to list the names of other Igbo Muslims who are well known in society. 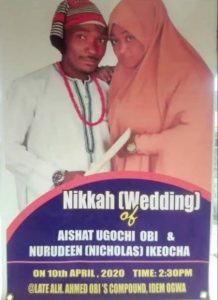