by Muslim News Nigeria
in Features
0

As the novel coronavirus pandemic continues to send shivers down spines of people in different countries around the world, governments and institutions across the world are doing their best to stem its spread by finding a vaccine and remedies for affected victims.

According to World Health Organisation (WHO) in its data release on Tuesday, March 17, over 168,000 people have tested positive to the virus and 6,610 have died globally.

With the rate of its spread and the consequential deaths, findings carried out by Muslim News revealed that precautionary and strident measures are being taken by governments around the world.

Nigeria’s federal government early today announced the indefinite suspension of the ongoing NYSC orientation programme across the 36 states and immediately issued a travel ban on 13 countries.

The directive came barely hours after the government placed a similar ban on public officials and civil servants until further notice, with the immediate rescinding of previously approved travelling abroad. 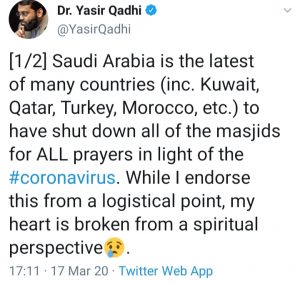 As at the time of filing this report on Wednesday by 4: 00pm, Nigeria has only recorded eight (8) suspected cases of Coronavirus, with the announcement of additional 5 cases, as the country, under the leadership of President Muhammadu Buhari promised to curtail the virus.

Muslim News findings reveal that many places of worship in the country, particularly mosques (both central and local) have not edged up in their precautionary strategies against the coronavirus pandemic.

Fears are all over the land as suspense continues to hold sway since the airports are still open to international travellers.

Observers of the development have argued that religious institutions – especially mosques, are simply not ready for the battle against the deadly disease. 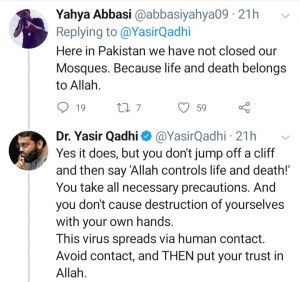 Our findings show that prominent Islamic organisations with high membership strength are lacking in the provision of basic preventive materials.

Observers said though some of them have made efforts at sensitizing their members on the deadly pandemic, the need to make the preventive materials available can never be ruled out.

Muslim News however observed that in some Islamic organisations, few individuals have the hand sanitizers with them; sharing with few interested members.

Many mosques visited by Muslim News correspondents in some states of the Federation (between Monday to Wednesday by 2: 00pm) have no preventive materials such as hand sanitizers, tissue papers, soaps for washing hands, temperature scanners, among others at their respective ablution centres.

There is no information about precautionary tips against the deadly virus in the notice boards of many of the mosques visited.

“Many ratibi (small) mosques here in Ibadan do not have soap, sanitisers and even tissue papers at the ablution centres,” our correspondents who visited different places in Ibadan said, adding that, “even at Haramain mosque, there is no provision for such. The mosque located at Iwo Road, hosts not less than 2000 Muslims on Friday.”

We also heard that the situation is the same in many mosques in Lagos, Ogun, Edo, Osun and the Federal Capital Territory, Abuja, including the popular An Nur mosque where the Minister of Communications and Digital Economy, Dr Ali Pantami delivers his tafsir (exegesis of the Qur’an).

However, our correspondent said some mosques in Abuja including the one at Air Force base in Abacha barracks have been complementing government’s effort by making adequate provision to prevent the spread of the virus among the worshippers.

Coronavirus threats in our mosques

Concerned Muslims on social media are calling on the authorities and the Muslim community in various mosques to investigate the participation of Nigerian representation at the annual Ijtimah (convention) held between 27the of February and 1st of March 2020, in Malaysia.

The country’s Health Ministry discovered that after the conclusion of the programme, 77 Malaysian participants were found to be positive of the virus.

Muslim News findings revealed that no fewer than 16, 000 participants across the world (14,500 Malaysians, 1500 foreigners) graced the event at the Sri Petaling but all efforts to track the details of Nigerian representatives at the convention have proven abortive.

“On a serious note, the NCDC ( Nigeria Centre for Disease Control) needs to know and track down any Nigerian who attended that tablighee ijtima in Southeast Asia. This is because the members of tabligh move around very much. Also, they have a sense of blind tawakkul (from my experience with brothers in the group) This isn’t a sectarian post. This is pure common sense. Help me tag the NCDC if you can or send this to them.”

It is however not certain if the NCDC or the Nigerian Muslim community has identified anyone that attended the event, same way no one from the Jamah has presented himself for screening despite the fact that many mosques do not have temperature scanners.

The fears over the COVID-19, the official name of the pandemic, has risen in recent times with countries taking tight measures, including ban of congregational prayers in mosques.

In the Kingdom of Saudi Arabia for example, mosques have been closed down for both congregational prayers and Jumaat except the two holy sanctuaries, Masjid Haram in Makkah and Masjid Nabawi in Medinah.

Umrah, lesser Hajj, has been suspended indefinitely with the fear that the ban might affect the conduct of the annual hajj where no fewer than 1.5 million Muslims across the world will be in attendance.

Several other Muslim countries including United Arab Emirates, Qatar, Algeria among others have also placed a ban on congregational prayers in a bid to stem the spread of the pandemic.

Many observers believe that the Nigerian government is up and doing in its fight against the pandemic, urging that there is need for religious institutions to complement government efforts.

Speaking with Muslim News from her base in Doha, Nusaybah Dhikrullah-Orenaike said;

“We all pray at home. All mosques have been closed since yesterday (Tuesday). Children have been at home for the past 2 weeks now due to closure of schools.

“All schools, madrasa, universities have been closed down. All medical appointments have been cancelled. Only emergency cases are been attended to. Latest information now is that all malls will be shut down.”

She therefore called on the management of the mosques and Islamic organisations to continue to educate their members and make available adequate materials such as soaps, sanitizers at ablution centres.

“Nigerians should ensure they comply with the directive of the government by taking precautions. Our mosques need to do more about it by providing all the necessary materials to avoid the spread of the disease,” she added.

Cancellation of programmes may not be necessary if…

Two Medical Doctors who spoke separately with Muslim News said congregational prayers in mosques and religious gatherings or social functions can still be held due to the limited number of coronavirus virus cases in the country.

They however called for provision of necessary medical materials including temperature scanners to be used for temperature measures at the entry point.

Dr. Kafayat Onigbanjo who spoke to Muslim News said ban of congregational prayers in mosques can be pronounced if there is confirmation that the virus is spreading actively.

According to her; “I don’t think there is need for such now. The countries where the ban is in place, have a large number of confirmed cases and mortalities. Hence, people should be allowed to pray in the mosque as long as there are precautions.

“The people organising events or the mosques should be able to afford temperature scanners to measure temperatures. Bacterial hand wash and sanitizers can be introduced.

“But the truth is that many small mosques may not be able to afford it because the items have become so expensive now. Members can volunteer to buy for their mosques. In conclusion, events are better cancelled if precautions cannot be afforded,” she added.

In his own submission, Dr. Abdul Wahab Egberongbe said;

“There is no need to ban or suspend gatherings yet especially those with less than 50 participants, because the incidence of this pandemic in Nigeria is not much yet. Programmes can still be held but with caution.

“Regular hand washing techniques should be encouraged to be practiced in mosques and tools should be provided e.g handwash posts and sanitizers.

“Already, many religious organisations are cancelling their programmes. Even at the level of Ramadhan Committee of Surulere, Lagos where I am a member, we’re still monitoring the outcome of events as regards how it will affect some of our Ramadan programmes like taraweeh and i’tikaf, where people are secluded in the mosque for the last ten days,” he added.