Muslim News fact-check: Nigeria not among the 25 foreign countries that attended Tabligh Ijtimah in Malaysia

No member of the Nigerian Jamatu Tabligh attended the recently concluded Ijtimaa’h in Malaysia as speculated by a section of social media users, Muslim News can confirm.

The convention which held in Kuala Lumpur between February 27 and March 1 has sparked uproar on social media following reports that about 743 among the 1600 participants have tested positive for Coronavirus.

Nigerians on social media have called on the authorities and the Muslim community in various mosques to investigate the participation of Nigerian Nigerian representatives at the convention.

One of the leaders of the Jamaah in Nigeria, Alhaji Ishaq Tijani has debunked the claims in an exclusive interview with Muslim News.

Further findings by our correspondents showed that no members of the Jamaat from Nigeria attended the Ijtimaa’h in Malaysia.

The list of attendance by foreign guests of the Jhor Qudamar Malaysia revealed that the conference was attended by faithful Muslims from across the world with many countries having their share of participants.

A total number of 1526 delegates from 25 foreign counties participated in the conference, with Indonesia having the highest number of participants (695).

The breakdown of other countries is shown in this picture 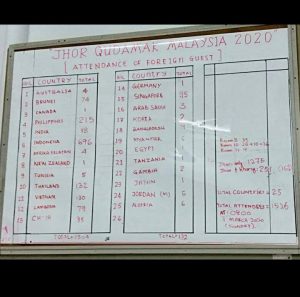