Agege Local Government Area of Lagos State has sealed the popular central mosque in the area for violating the state government’s order on a religious gathering in the fight against the spread of the coronavirus pandemic.

Governor Babajide Sanwo-Olu had banned gathering of more than 20 persons in one of the rafts of preventive measures announced by the government to curtail the deadly disease spread.

However, worshippers at Agege Central Mosque better known as Mosalasi Alhaja, located at Balogun Street, however, flouted the order on Tuesday during the Evening Prayer (Isha) and worshipped in hundreds. 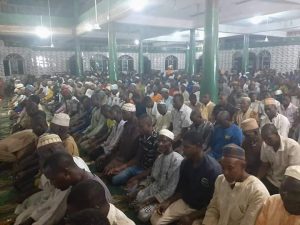 Attempts by officials of the Lagos State COVID-19 Taskforce, who arrived at the scene to enforce compliance following a tip-off was said to have been viciously rebuffed.

“A drama ensued when some of the Muslim youths sighted the team and became aggressive, unruly and started to attack the team. Others in the mosque, numbering about 300 rushed out chanting ALLAHU AKBAR and joined them in the attack by throwing stones at the vehicles.

“All entreaties to talk to the Imam failed as the youth were persistent. But the Police escort rose to the occasion by curbing further attacks and ensuring the safety of the team”, statement by the General Manager, Lagos State Environmental Protection Agency (LASEPA) and leader of the Taskforce,” Dr Dolapo Fasawe had said.

The Council on Thursday sealed up the mosque after a fumigation exercise led by the Executive Chairman, Alh. Ganiyu Kola Egunjobi was conducted at the venue. 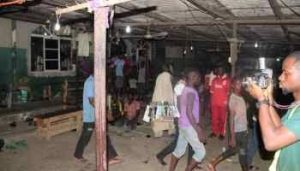 Speaking at the scene, Egunjobi said the shutdown became necessary to avert recurrence and serve as a deterrent to other erring faith groups or worshippers.

“We cannot continue to condone act capable of spreading this dreadful disease. Even Saudi Arabia placed restrictions on the number of people who must worship in the two holy mosques, Haram and Nabawi and banned congregational prayers in all other mosques across the country. Honestly speaking, we cannot be more Roman than the Romans.

“We have had an engagement with the leadership of the mosque including the Sarkin Hausawa, HRH Musa Muhammed, and our resolution is that it should be shut down till further notice,” the council chief said.