Special Report: How Sokoto, the seat of the Caliphate ushered in Ramadan 2020 amidst Coronavirus

Sokoto, an ancient city in extreme Northwest Nigeria, has an age-long history of Islamic struggle and revival. Named the Seat of the Caliphate, it parades a handful number of Islamic scholars and preachers. At the center of it all is a traditional king, otherwise referred to as the Sultan (Emir/Amir al-Mu’minin) who wields enormous influence in Nigeria and the entirety of Africa.

Few days ago, Alhaji Muhammad Abubakar Sa’ad III, the current and 20th Sultan of Sokoto, who also doubles as the President-general of the Nigeria Supreme Council for Islamic Affairs (NSCIA) made a televised broadcast right in his palace to usher in Ramadan 2020 – the month of Muslim Fast, which is observed by the entire estimated 1.8 billion Muslim population worldwide.

Muslim News learnt that, just like many other states in Nigeria and across the world, the Muslim faithful in Sokoto made adequate preparations to welcome the holy month of Ramadan, one of the cardinal pillars of Islam, despite the ravaging Coronavirus pandemic that has killed hundreds of thousands, paralysing religious, social and business activities.

In this report, Muslim News investigates the various steps taken by residents to usher in the 2020 Ramadan in Sokoto – a state that prides itself as the permanent capital of the Fulani Empire and mother of the present day Kebbi and Zamfara States.

As Ramadan approached, beautification of homes and mosques commenced, just as people stocked-up for the Holy Month. As a signature to usher in the fast period, some mosques got repainted just as materials like kettles and mats were either bought or washed by mosques’ handlers and other volunteers.

Inhabitants enthusiastically trooped to the traditional markets, new markets, supermarkets and other mini-markets to stock-up foodstuff. In the spirit of the month, state and local government workers were also directed to be paid by the state.

Speaking with Muslim News, Malam Jamilu, a civil servant who was on his way to the market when approached by our correspondent said it was the norm in every Ramadan period for inhabitants to throng to the market to get staple food ahead of the fast period.

Jamilu was going to buy yam, cocoyam, sweet potatoes, rice, beans and other foodstuff for his family.

Though Sokoto has recorded its index and only case as of the time of filing this report, it is yet to declare a lockdown as people still have unfettered movements within the state. The government has however banned entry into the state as it consistently advises people on precautionary measures.

Muslim News findings revealed that a lot of programmes are regularly organized to mark the sacred month of Ramadan in Sokoto. These range from public lectures to congregational prayers and the feeding of the fasting Muslims, locally known as “Center” – wurin da aka ibuda baki.

According to an Islamic scholar who simply identified himself as Mallam Bashir, “It is a routine here for fasting Muslims to gather in mosques, public places or homes in large numbers to listen to soul inspiring lectures.

“Scholars and various Islamic groups organise Tafsir (lectures to explain the Qur’an) and share essential knowledge about Islam. A lot of people benefit from this to broaden their understanding of the religion.

It was gathered that influential and wealthy individuals do give out charity and gifts in this noble month. This involves a practice called “Center” – gathering of the less privileged for Iftar (breaking of fast). 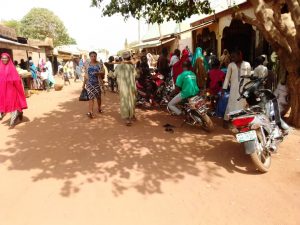 Pap and beans are the common foods served at the “Center”, locally called “wurin da aka ibuda baki”. On some occasions, rice is also served depending on the choice of the organizer. Muslim News further learnt that the state government does make provisions to feed fasting Muslims in the Holy Month.

In a release signed by the Special Adviser to Governor Aminu Waziri Tambuwal on Media and Publicity, Mr Muhammad Bello, Sokoto State was said to have constituted a COVID-19 Friendly Ramadan Feeding Program Committee to reach out to the poor.

Tambuwal noted that the program has been going on for a long time, but this year’s would be different following the guidelines of the World Health Organization on public gathering, adding that 500 million naira would be spent on the project due to the large number of the target beneficiaries.

Sokoto is characterised by scorching and burning sun which makes it take a tag of Sun-city. As soon as the sun sets around 6:30pm, one can hear the Adhan (call to prayer) for Solatul Maghrib coming from several angles given the number of mosques available in each area. In this regard, the streets of Sokoto are to mosques what the streets of Lagos are to churches. Interestingly, each mosque has a fair share of congregants.

With the disappearance of the sun, followed by the Adhan, Muslim faithful begin to break their fast for the day. Following the tradition of the Prophet (PBUH), most residents in Sokoto are used to breaking their fast with water. Greetings like “Barika da sha ruwa”, which could roughly mean “Aku abaja eni” and in English, “felicitations on the successful completion of today’s fast” rent the air.

In addition to taking water, fruits like dates (dabino), orange, watermelon, drinkables like kunu, fura and zobo are also in large supply. About five minutes after the Adhan, the muazzin makes the main call to prayer (Iqamah) for people to congregate for Salatul Maghrib.

With the reality of COVID-19 ravaging Nigeria and other parts of the world, the usual Ramadan programmes might also be affected in Sokoto state. As at the time of filing this report, Nigeria already has more than 1000 reported cases of COVID-19, while more than 30 persons have lost the battle to the disease.

After weeks of being free of the virus when Nigeria recorded its index case, Sokoto State recorded its index and only case yet on the 20th of April, 2020. Governor Aminu Waziri announced this in a broadcast made in both English and Hausa languages.

As a measure to arrest the spread of the virus, the government through the Special Adviser on Media and Publicity, Mr Muhammad Bello issued a statement cautioning against assembly at lectures and congregating for prayers, particularly, the Taraweeh.

The statement read in part: “The warning on public gathering for Tafsir and Taraweeh prayers in the month of Ramadan was an adoption of the recommendation of the Sultanate Council on both. This step was taken in order to regulate the convergence of people in one place, a situation that would only increase the risk of them getting infected by the COVID-19 disease.”

However, it is not clear whether the Ramadan programmes would be affected because investigations by Muslim News indicate that the faithful still gather in many mosques in the city to observe daily congregational prayers. Enforcement is yet to be strict, perhaps due to the present status of the virus in the state.

Speaking with Muslim News, Muhammad Abdullahi said popular scholars in the state are thinking of switching to virtual spaces for their lectures and Tafsir programmes, adding that the “Center” programme could as well be coordinated to respect the rule of social distancing by health experts.

Another resident, Garuba Danladi expressed his eagerness to welcome the month of Ramadan due to its inherent benefits. He however admitted that the reality of the Coronavirus would definitely affect many activities for the 2020 Ramadan. “Oga, this Coronavirus will affect many things, I can tell you. We just pray that Allah comes to our rescue,” he said.