Spokesman to Kaduna State police Mohammed Jalige in a phone conversation with our correspondent said, “I can confirm to you that he has been arrested and he is in police custody.”

“I cannot tell you about where he is (whether Kaduna or Kano State custody) but he has been arrested.”

Bala, the president of the Humanist Association of Nigeria, was arrested by the police on Wednesday afternoon at his residence in Kaduna State, Jalige disclosed.

Although Jalige did not speak about the reason of the arrest, it is not unconnected to Bala’s recent outburst against Islamic Prophet Muhammad (SAW) in a Facebook post.

Mubarak Bala has committed an act of sacrilege , and worst still a blasphemy, by his drug-fuelled post on Facebook. What he did was blasphemy or the unpardonable sin, a sin so awesomely bad that it can not be forgiven. We cannot tolerate that. #MubarakBala must not be freed. – Muhammad Bukar @Mohammed_Esq posted on Twitter

“There’s no difference between prophet TB Joshua (S.A.W) of Lagos and Muhammadu (A.S.) of Saudi Arabia, it is better for our Nigeria to be terrorism,” Bala said.

In another post, Bala said, “Whoever believes religion has been duped – If you cant take blasphemy against Islam, criticism of its doctrines, this page is not for you. I have not even started ooo.”

His post was greeted with threats of arrest for blasphemy in the comment section. Unrepentant of his stance against Islam, Bala said the threat was from ‘morons’ who should know better. 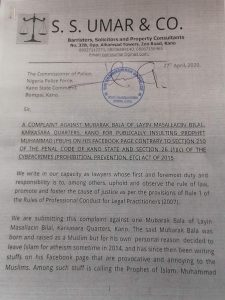 Kamil Kafi @Kameel_kk also tweeted that: The highest expectation of Muslims towards the non-muslims is “everyone to his belief” while the least is blasphemy of our prophet or derision of our religion, Islam. Let the law take its course on #MubarakBala

Bala is not new to issues around blasphemy by government and private citizens.

In June 2014, he was held at the Aminu Kano Teaching Hospital by government officials who claimed he was a psychiatric patient against his wish.

In a post on International Humanist and Ethical Union (IHEU) website said he was detained at the hospital on the grounds of a “personality change” because he had become an atheist despite being raised in a Muslim family.