Saudi Arabia on Thursday recorded 1,975 new coronavirus cases, four days after reopening about 90,000 major and minor mosques across the Kingdom.

Recall that after over a two-month closure, the Saudi Arabian authorities had on Sunday reopened more than 90,000 major and minor mosques across the Kingdom.

The reopening of mosques was done in accordance with the instructions of Minister of Islamic Affairs Dr. Abdullatif Al-Asheikh and in line with an advisory issued by the Senior Council of Ulemas.

On Friday, a report by the Saudi Gazette quoted the kingdom’s ministry of health as disclosing that the new infections were recorded within 24 hours, adding that 806 recoveries were also recorded in the kingdom.

Saudi Arabia had recently witnessed a downward trend in number of infections but the numbers in the last two days show a reverse trend. 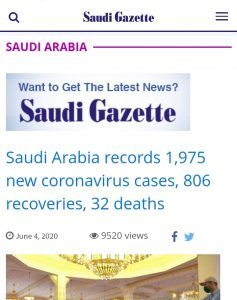 Meanwhile, 32 more patients have died, raising the death toll to 611.

Of the new cases, Riyadh reported most number of infections with 675 cases while Makkah, Jeddah, Madinah and Hufof saw 286, 259, 124 and 112 new cases respectively.

The ministry also pointed out that among the new cases, Saudi citizens make up for 52 percent and the expatriates account for the remaining 48 percent. 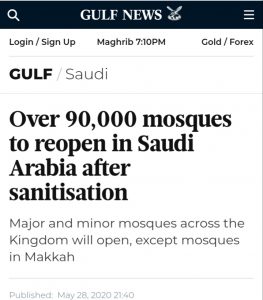 With regard to the tests at the laboratories, the ministry disclosed that 16,246 additional tests were conducted, bringing the total number of tests carried out in the Kingdom to 887,209 so far.