The video of the noble initiative by the 15-year-old Muslimah which has attracted torrential encomiums caught the attention of Mobile Telecommunications Network, MTN and was shared as “Episode 3” on MTN mPulse Meet the Genius platform for the month of June, 2020.

But unknown to many, Muslim News learnt that Abeedah’s admission into SS1 was threatened when her right to wear the shoulder length hijab was initially denied by the school management about two years ago.

Multiple sources at the point of registration and during the Parent Teacher Association (PTA) meeting narrated how Abeedah’s mother, Mrs Naimat Alabi resisted an attempt to deny her daughter’s right to education over the use of Hijab, insisting that hijab remains the fundamental right of her child

▪︎ Despite criticism over her Hijab, she continues showcasing the beauty of Islam – Mother

In an interview with Muslim News, Mrs Alabi said her joy knows no bound as she thanked Almighty Allah for the journey so far.

According to her, “I feel very happy. And I thank Allah for the journey so far, especially how we started when she was admitted into the school. But by the grace of God, they are all our friends now. We are just like a single family. People do discriminate against us (Hijabites) too much, because of our Hijabs, but, Alhamdulillah, we keep showing them the beauty of Islam.

“The Abeedah we are all celebrating today was almost denied admission 2 years ago by the same school. The management said Hijab wasn’t allowed in the Senior Secondary School. They told us during the meeting that Hijab was not part of their uniform, and it should not appear on the passport for the registration.

“But we told them that it’s her constitutional right. Besides, there is an existing court judgement that allows school girls to use the Hijab. We told the school that at this stage of their lives, it’s even more important for her and her peers to use the Hijab since they are getting mature.

“So, she went with her Hijab with a passport photograph that bore the Hijab. There was a disagreement but at the end, they allowed her to use it because we made our position known to them that we were not going to compromise Abeedah’s right. We also got support from Hijab Rights Advocacy Initiative. Alhamdulillah, she has been using the Hijab since then without any harassment,” she said.

The mother of the awardee also praised the Lagos State government for its giant stride in taking education to an enviable level, while also acknowledging the efforts of her daughter’s teachers, saying they are the best.

“I must also appreciate the efforts of the Lagos State government in repositioning and taking education to a top-notch level. The commitment of the government is there for everybody to see. Lagos State has always been at the forefront in terms of educational development.

“My daughter usually relates with me some of the special trainings given to them at different fora courtesy of the government. It shows that the government is keen about students’ development. Learning should not be limited to schools only. It is in the course of one of the trainings given to them that she was challenged to come up with the initiative that won her laurel.

“I also commend her teachers. They have always been supportive. In fact, the teacher that discovered her is a Christian who has been tutoring her without bothering about her Hijab. I have cordial relationship with most of them. I know them to have always been putting in their best to ensure the success of their students. I pray God to reward them abundantly, and charge them to keep the ball rolling.

Confirming the incident, the Director of Hijab Rights Advocacy Initiative, HRAI, Barrister Mutiat Orolu-Balogun recalled how her NGO worked with Mrs Alabi to see that Abeedah was eventually registered.

Barrister Orolu said, “The principal took this stance in contravention of the order of the Court of Appeal’s Judgement in the case of Asiyat Abdulkareem & anor V. Lagos State Government & ors which held inter alia that the Hijab was a fundamental right of all Muslim female students and ordered the Government and its workers not to prevent any student from doing so.

She showered encomiums on the 15-year old Muslim student for being the brain behind the ‘E-Trash Bot’ innovation, saying, “Today, Abeedah Alabi has proved us right and done us proud. We are happy today that she is even being celebrated by those who initially discriminated against her. We are proud to have stood by this talented little girl, who wanted to be educated while still upholding her Right to freedom of Thought, Conscience and Religion,” she said.

Hajia Orolu reiterated the group’s commitment to standing up for the rights of Muslim women and girls to wear the Hijab, regardless of their status and profession, adding, “We will continue to advocate for Hijab inclusion and to emphasize that discrimination harms not only the victim, but all of us. Every girl shouldn’t be denied her right to education on the basis of her Hijab,” she added.

In her remarks, the School Principal, Mrs Adesanya Olufisayo Abimbola hailed the talented teenager for the feat, saying she has continued to distinguish herself, and that the feat is a testament to her involment as well as commitment to using technology to solving local problems.

She said Abeedah has won various awards and accolades for her school and participated in teams that won various local, national and international competitions in the past two years.

In addition to the awards, Mrs Abimbola said Abeedah has also taught 50 youngsters on the basic rudiments of the Spanish Language and Graphics Design as part of her humanitarian and self-development projects.

Apart from creating the electronic trash bot to aid disposal of refuse, Abeedah has also represented the school at different competitions with her Hijab and won multiple awards and accolades, including the 2020 National ICT Girls Empowerment Competition organised by the Federal Ministry of Information and Communication, Abuja, where she emerged overall winner. She was also the Regional Semi finalist winner, Technovation Global Competition.

Speaking exclusively with Muslim News, the awardee, Ms Abeedah Alabi said she was very excited and feels fulfilled about the achievement, hoping that other Muslim students would be inspired by her story.

She advised fellow Muslim students neither to be discouraged with the use of the Hijab nor be deterred by public hostility and disapproval that come with it, saying they can always make Islam proud to the disappointment of the naysayers.

According to her, “Actually, I feel excited, Alhamdulillah. When I started, I didn’t see myself achieving this. All eyes were always on us as Muslims using the Hijab. One of my teachers who is also my mentor usually admonished us. She does urge us to keep striving and never engage in any act that will soil the image of Islam.

“Before we went on vacation, I was able to achieve something tangible. This really gained me respect, even from non-Muslim teachers and the cynics who do not expect much from us (Muslims). So, I feel very excited with the achievement. And I hope it will inspire other Muslims out there. They should not get deterred by their dressing or public disapproval”.

Giving the background into how the feat was made possible, Abeedah said she initiated the E-Trash Bot as a project assigned to her in a competition after a three-day training on programming and energy creation attended by students from various schools in Lagos State.

“The project is a Trash Bot. We developed the solution last November when we were to attend a competition. So, they gave us a 3-day training at a workshop. We were taught different things at the workshop.

“After the exercise, we were assigned with a project each to develop. We brainstormed. My team mates and I, including my teachers started brainstorming to build something that would ensure the environment is cleaner and safer. So, I came up with the project.

“The Trash bot was built to ensure proper disposal of waste. It’s not only about making the environment cleaner, we also want to change the mindset of the community with the project. People would see a dustbin on ground, but will still prefer to throw particles and waste on the floor or in the drainages. The ultimate goal is actually to change the mindset of people in disposing refuse and waste”, she explained.

The celebrated winner told Muslim News that she would like to become a Computer Programmer and Motivational Speaker in the future, drawing inspiration from her parents who are also Computer experts. 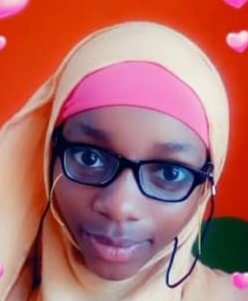 “I will like to become a Computer Programmer and Motivational Speaker in the future. For taking a career in computer programming, I was influenced by my parents firstly. Then looking around, I realized there were many problems in our society which could be solved with the aid of technology so I decided venture into the line of programming.

“On the other hand, I like to make impact in the lives of others. And that’s why I choose to be a Motivational Speaker. I have started with people around me, even my parents. I try to impart the knowledge I have about programming and other life changing skills to others”.

We at Muslim News join the rest of the Ummah in congratulating Abeedah and praying Allah to preserve her upon good.

– By Rasheed Abubakar and Abdullahi Abdulganiy