Exclusive: Man refrains from eating meat with ‘Allah’ inscribed on it, says he intends to preserve it

A Muslim man, Hasan Taiwo Shodeinde has been locked between anxiety and excitement upon finding the inscription of the name of Allah clearly written in Arabic on a slice of meat he purchased at the market.

Shodeinde, who resides in Isolo area of Lagos, southwest Nigeria, in an interview with Muslim News, recalled how he made the shocking and thrilling discovery after boiling the already sliced pieces of meat.

According to him, “The incident happened on Thursday, June 18. On getting home, my wife washed and boiled the meat and later discovered that “Allah” in Arabic was inscribed in one piece of the meat.

She rushed out to inform me but I found it difficult to believe. Although I have read similar stories of Allah’s name appearing on a tree, this is the first time I am witnessing it.”

The social and political activist also revealed how the meat, despite spending days, was still fresh and smelling nice, saying that he noticed it was self-preserving.

Shodeinde, who brought the meat to Muslim News office in Surulere on Monday, June 22 accompanied by a colleague of his, said, “Can you see it (bringing out the meat from the transparent container)? It is still fresh. I think, the meat is preserving itself, just like the way we bought it even though it’s shrinking (reducing in size).”

He said while they had finished consuming other slices, he couldn’t eat the only slice with the mysterious inscription of Allah’s name in reverence to his Creator’s Holy name.

“We couldn’t eat it because of the reverence we have for Allah’s name even as we finished eating others. I have been hearing about it but this is the first time I will witness it. To me, it is one of the signs of Allah. Allah is Great,” he added.

Asked what his plan for the meat with Allah’s name is, Shodeinde said he wouldn’t eat the meat but rather preserve it for future generations to also witness it. 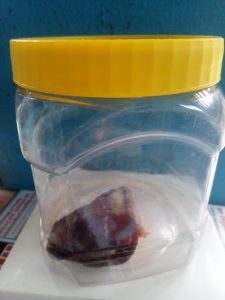 “I don’t think I will eat it. It should be preserved with other wonders and signs for our future generation to know. We should always have archives for things like this because some people would say it is a lie, not true. This is real and you (Muslim news) can see it. That’s why I brought it to your office,” he concluded.

While reacting to the development, a Muslim scholar and Senior Assistant Registrar at the Yaba College of Technology (YABATECH), Ustadh Saeed Salman said it is one of the signs of Allah, adding “The meat is not forbidden and could be eaten, albeit the part that carries Allah could be cut off and buried.”

According to him, “If the story is true as you have said, the first thing we need to draw from this event is that Allah uses different signs to show His might. However, seeing the name of Allah on the meat doesn’t make it forbidden for consumption. So, the part that carries the name can easily be cut off in reverence to Allah, and then buried. Other parts could be eaten.”

"We will show them Our signs in the horizons and within themselves until it becomes clear to them that it is the truth. But is it not sufficient concerning your Lord that He is, over all things, a Witness? Qur'an 41: 53 #Quran #Muslims #Hajj2020 #COVIDー19 pic.twitter.com/TMTnmXEOaC

When asked if any significance should be attached to the event, the Mudir (Principal) of Madrasat Sahwatul Islamiyah, Iwaya, Lagos responded in the affirmative, noting that the development is a very rare and surprising one which should take us back to Allah and make us ponder on His might.

READ ALSO...  Exclusive: "I would have also been at Masjid-al-Noor at the time of the terrorist attack, if not..."

“Well, there are different perspectives to which we view issues. Ordinarily, we don’t find the name of Allah on pieces of meat. So, there must be a reason for this. And there is nobody that can say it was somebody that wrote the name on the meat. Therefore, it is something worthy and great,” he added.

He therefore warned that the meat should not be turned to object of worship or veneration, saying it would amount to ‘shirk’, meaning, associating partners with Allah.

“Sadly, some people might commit shirk just because of this inscription on a piece of meat and turn it to an object of worship. We as Muslims must not indulge in this habit that nullifies our Islam. I remember vividly about 6 years ago, some people started worshiping a tree in Ibadan because they found Allah’s name written on its bark. This is a discouraged act,” he added.