▪︎Speaks on the inspiration behind her artwork

I feel positive that something good is coming out of Nigeria – father, Alhaji Kaka

The winner, who is the daughter of a former deputy governor of the state, Senator Adegbenga Kaka, came tops amongst over 4,000 participants in the competition organised by a charity group, Never Such Innocence.

The awards presentation was billed to hold in London on June 17 but for the COVID- 19 challenges.

Johnson, however, expressed regret for the inability to host the winners at the scheduled date.

In a letter, the British Prime Minister congratulated the winners and participants, saying they filled her with hope for the future.

He said, “You show me that, as we mark 75 years since the end of the Second World War, young people are paying far more attention than many would give credit for, and are determined to learn from our past.

“You show me that you care about the impact of conflict, and I’ve thought long and hard about how you can use your voices to unite communities and nations. Most of all you show me that you have the courage required to stand up in front of a crowd of strangers and with skill, passion and a command of our wonderful language – let the world know exactly what you are thinking.

“That skill of self-expression, that art of persuasion, will always be the very best way of avoiding conflict, healing division and making this a better place for all of us. So please, keep thinking, keep writing, keep talking, and keep performing.”

Giving an insight into her artwork, Mariam, who is a SS 2 student, said her inspiration came from the fact that the second World War was the deadliest globally. 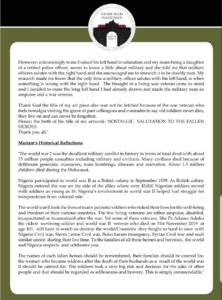 The Hijab-wearing Muslimah said, “My drawing medium is oil on paper and it is A3 size. My inspiration came from the fact that the World War II was the deadliest in terms of global deaths, injured, wounded, incapacitated, disabled and traumatized casualties.

“My inspiration was heightened when I saw the commonwealth war Graves as one of the second World War resource contents for a fight for freedom. Plus, Nigeria being a commonwealth nation.

“I was excited to draw a war grave which is a burial place for members of the armed forces and civilians who died during the world War II. I also thought of armed forces remembrance day when wreath of flowers are laid in remembrance of fallen heroes and decided to draw a military man visiting war grave.

“However, unknowningly to me I raised his left hand in salutation and my mum being a daughter of a retired police officer, seems to know a little about military and she told me that military officers salute with the right hand and she encouraged me to research it to be doubly sure,” she added.

Also speaking to Muslim News, Mariam’s father, Alhaji Kaka, a one-time deputy governor of Ogun State related how his daughter came out successfully in the contest, noting that it really gladdened his heart as a father and patriotic Nigerian.

According to him, “44 countries put in for the entry, and 4,000 participants were involved across the world. She knew nobody in the organisation behind the competition. Everything was done online with no physical interaction. In the end, her work was adjudged to be the best.

Describing his feeling, the elderly stateman said he was very excited that this feat would send positive signals to the world that Nigerians are not bad people. This is a plus for the West African country.

“I feel very elated, just like any other father will feel. And beyond being her father, I feel positive that something good is coming out of Nigeria. What this is saying is that all the negatives projected to be the definition of Africa in general, and Nigeria in particular are not true. We are now showing the world that we can excel in any field of human endeavour. Our children are doing great. So, people should stop making negative remarks about us.”