Fact-checking the Fact Checker: Is Prophet Muhammad the ‘founder’ of Islam?

▪︎The verdict on black seed should have been 'not proven' scientifically, not 'incorrect'

The black seed oil, known in Arabic as, ‘Habbatu-s-Saudaa‘ has been proven to be effective for a number of diseases ravaging humanity. 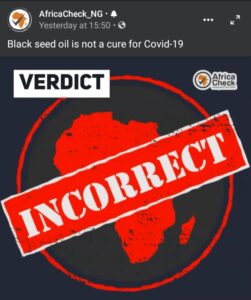 In an authentic hadith narrated by Abu Hurayrah, the Prophet Muhammad (peace be upon him) said, “Hold on to this (use this black seed regularly)! Because it is a remedy (cure) for every disease except death.”

Since the emergence of COVID-19, there have been ongoing efforts by researchers and scientists to initiate a cure for the pandemic that has killed hundreds of thousands of people. However, a time-tested and effective drug or vaccine is yet to be gotten.

Similarly, experts in Prophetic medicine have also been striving to arrive at a traditional cure for the novel Coronavirus, testing various herbs and concoctions. 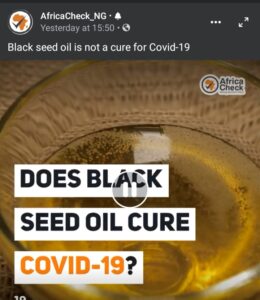 Of all the herbs however, all eyes have been on the black seed oil which has been confirmed in sound narrations from the Prophet (SAW), who according to Allah, “He does not speak anything of his own desire. It is only a Revelation revealed”. Qur’an 53: 3-4

But, in what it called “fact-check”, Africa Check Nigeria described as “incorrect” claims that the black seed oil could cure COVID-19.

Muslim News Nigeria can authoritatively confirm that the use of “incorrect” was not appropriate as used by the group.

The verdict should have been that the ability of the black seed as a cure for the novel Coronavirus has not been “proven” scientifically, because scientific procedure could validate it in the future. 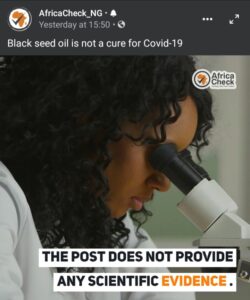 It is too early to preempt, as evidence about how many of the claims of the Prophet were later proven by scientific research. It is therefore safe to say that, it has not been validated empirically.

While trying to buttress its claim that Black seed cannot cure COVID-19, Africa Check Nigeria committed a gaffe when it said Prophet Muhammad was the founder of Islam.

The claim that Prophet Muhammad is the “founder” of Islam in the fact check report is a factual error that needs to be fact checked again, in order not to mislead its numerous readers. 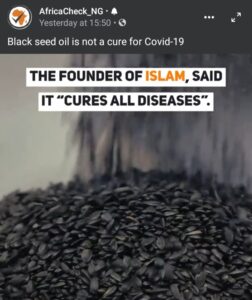 Prophet Muhammad (SAW) is not the founder of Islam. Rather, he was the Prophet of the religion of Allah sent to mankind.

Scripturally, Allah told Muhammad (SAW), “This day I have perfected for you the religion and completed My favours upon you and have approved for you Islam as your religion.” Qur’an 5: 3

This Islam, Allah (SWT) said to the Prophet (SAW) isn’t a new religion.

He added, in another verse, that, “He has ordained for you as religion what He (Allah) enjoined upon the Prophet Noah and that which We have revealed to you, [O Muhammad], and what We enjoined upon Abraham and Moses and Jesus – to establish the religion and not be divided therein. Qur’an 42: 13

Also, Islam means submission to Allah’s worship alone which was used to describe Prophet Ibrahim and his son, Ismail, in Qur’an 2: 127-128, after they had completed the building of the Ka’aba. 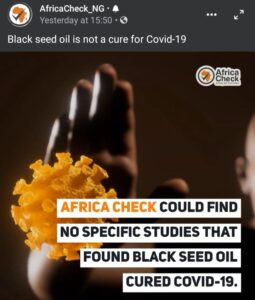 They said, “Our Lord, and make us Muslims to You and from our descendants a Muslim nation [in submission] to You. And show us our rites and accept our repentance. Indeed, You are the Accepting of repentance, the Merciful”.

Evidently, those who practice Islam are called Muslims and from the evidence provided above, Prophet Ibrahim and his son, Ismail, were also Muslims.

The fact of history is that Prophet Muhammad, who happens to be a descendant of Prophet Ibrahim, only came centuries after to perfect Islam and popularise it.