by Muslim News Nigeria
in News
1

Tuesday, August 18 was a great outing for the Muslim Students’ Society of Nigeria (MSSN), Lagos State Area Unit as it presented its Amir and newly inaugurated executive council members to the Nigerian media at the Press Centre of the Lagos State Government House in Alausa, Ikeja.

The interface was covered by correspondents of various media outlets — broadcast, print and online media, including Nigeria’s most authoritative Islamic newspaper, Muslim News.

The new executive council members were elected at a virtual conference over the weekend.

Speaking with newsmen, the immediate past Amir, Dr Saheed Ashafa appreciated the Nigerian media for the massive support given to the organisation over the years, saying they went a long way in moving it forward.

He particularly alluded to the love and support shown to his administration by the media, pleading with them to extend same to the new administration led by Mallam Thanni.

The new Amir, Mallam Miftahudeen Thanni flanked by the outgoing Amir, Dr Saheed Ashafa in glitz and glamour welcomed the gentlemen of the press to the event which had other stakeholders of the religious association in attendance.

In his remarks, Mr Thanni who introduced himself and his cabinet members, said he would be very glad to corral more support from the fourth estate of the realm in improving human capital which is the focus of his administration.

The Law Graduate also used the opportunity to hold a press conference on burning issues in the country. 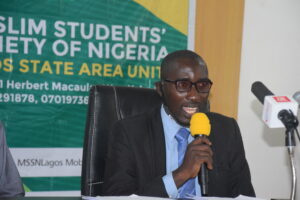