The National Missioner of Ansar-ud-deen Society of Nigeria, Sheikh (Imam) Abdur Rahman Ahmad has said the late venture of Muslims into mass communication has greatly affected their representation.

Sheikh Ahmad made the observation on Wednesday while speaking at the lslam and the Media Webinar, organised by Rawshield PR Media, in commemoration of Muslim News Nigeria’s 2nd anniversary.

The respected Islamic scholar commended the Publisher for his initiative and creativity.

He also expressed gratitude for the extension of invitation by Muslim News, Nigeria’s most authoritative Islamic newspaper to speak at the Islam and the Media virtual lecture, Series (1), with the theme; Survival of Islamic Media Institutions: Reflections from Nigeria.

He said, “I want to put on record my appreciation for the great work that the publisher, Bro Abdur Rasheed Abubakar is doing. I must tell him, it is, to many of us, a great inspiration. It is a pleasure and we are happy for the effort. We pray Almighty Allah to continue to strengthen him.”

The veteran broadcaster chronicled the history of Nigeria media and Islamic news reporting, asserting that the British colonialists had a significant impact on the profession in the country.

According to him, the ‘Iwe Iroyin Yoruba’, which was a precursor in the Nigerian media profession, was largely a missionary venture targeted at informing, educating, entertaining, and more importantly, proselytizing the readers.

The flagship of Islamic Journalism

Sheikh Ahmad, while addressing no fewer than 400 participants at the Webinar, spoke extensively on the impact of the media on the society. He noted that it, in fact, served a dominant role in fighting colonialism and agitating for self-rule in the country. 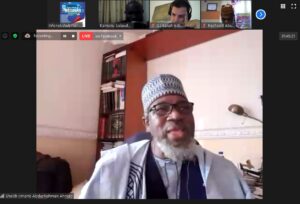 He said, though early Nigerian Muslims later developed interest in the media with the publication of Islamic magazine, the conventional media, particularly newspaper, had been well established and dominated by the non-Muslims.

“I could recall that it was the activities of the Muslim Students’ Society of Nigeria (MSSN) that led to the establishment of Islamic media in Nigeria,” he said, adding that, “The A Zone (Northern) published ‘The Radiance‘, while the B Zone (Southern) published ‘Al-‘Ilm‘.”

Imam Ahmad described the publications of the students’ body as the flagship of Islamic Journalism in Nigeria, influenced by foreign Islamic magazine like Al-Yakeen International, a quasi-tabloid dedicated to the propagation of Islam.

“However, we didn’t pay attention to news for agenda setting or development journalism. The publications did not really conform to the standards of the profession because they focused only on Islamic propagation.

“There was therefore no dedicated Islamic newspaper because we knew news from a perspective other than Islam. That continues to impact upon us and we were and still are misrepresented in all the arms of the media, especially newspaper,” he noted.

Sheikh Ahmad hailed the early Nigerian Muslims who shaped Islamic media, among them, were the late Alhaji Ismail Babatunde Ajose, one of the pioneers of journalism in Nigeria, who died in August 2018, at the age of 82.

He said, “Alhaji Jose was among the pioneers of journalism in Nigeria. His faith was dear to him and he and other Muslim journalists tried their best. He was a Muslim and a journalist who trained many people including Mr. Bola of the then Daily Times (DT), from whom I got exposed to practical journalism in the late 60s and early 70s.”

The National Missioner of Ansar-ud-deen Society of Nigeria stated that there was the problem of Muslim proprietorship in the media, not until when late MKO Abiola came and founded Concord Newspaper in 1980 and by the end of 1983, it had become the most read conventional newspaper in Nigeria.

“For long, Muslims didn’t have a voice. We didn’t have a representation. In terms of proprietorship, we weren’t there until the late MKO Abiola established Concord Newspaper. The newspaper though not an Islamic newspaper, it was established by a Muslim. As a result, we had some of our brothers – including Alhaji Femi Abbas and Bro Liad Tella, who represented Muslims in the media and they tried to project Islam, albeit indirectly, through their writings.

Speaking further at the Webinar that had three other Muslim journalists and two International media and communications expert, Sheikh Ahmad said some Muslims also made efforts to start newspaper or what he called ‘newsletter’, both in Southern and Northern Nigeria.

He specifically mentioned ‘Gaskiya Ta Fi Kwabo‘, the world’s first Hausa-language newspaper founded in 1938 and ‘Al-Islam‘ newspaper, which was very popular in the Southwest in the 90s and early 20s.

“Al-Islam was basically in form of a newsletter, and not a newspaper. The publisher, Alhaji Yemisi-Coker (who was also among the panellists at the Webinar) tried his best (may Allah reward him), but it later fell.

“We also had ‘The Bloom’, where I worked with a couple of Muslim brothers who just left school then and were looking for where to practice. We also did all we could, but I must admit, it failed. This was because we were limited by the in-house editorial policies. We didn’t have that editorial control. We were largely hampered, and this is the case with many Nigerian media organisations where Muslims are hindered from showing their religious bias.”

Muslims News investigations revealed that there were other attempts, especially from MSSN Unilag with the establishment of Al-Hikmah Awareness, edited by Alhaji AbdurRazaq AbdsSalam. The newspaper later metamorphosed into Ashabab Pen Magazine,

The publisher of Muslim News, Mr Abubakar, we reliably gathered began his quest into Islamic journalism in 2009, with the establishment of AL-FAHM, a publication of MSSN Surulere Area Council, Lagos. The publication was published bi-monthly for 6 years until it was rested in 2015 when Mr Abubakar had a ghastly motor accident.

On the way forward, Sheikh Ahmad said training young Muslims, funding and readership are some of the factors that could help in sustaining Islamic Newspapers in the country after years of failed attempts.

He said Muslims need more hands in the media, who should be trained and offered proper mentorship, while advising that Muslims should support nascent Islamic media organisations with both funding and readership.