Movie was partly filmed in region where more than one million Muslim Uighurs are allegedly held in concentration camps.

The Walt Disney film, Mulan, is facing renewed calls for a boycott after authorities in China’s westernmost region of Xinjiang, where some one million Muslim Uighurs are being held in camps, were named in the movie’s closing credits.

The live-action adaptation of the 1998 animated film of the same title is on livestreaming platforms in the US but has been released on the big screen elsewhere. It is expected to premiere in cinemas in China on September 11 – following more than four months of delay because of the pandemic.

Based on a 2,000-year-old Chinese legend, Mulan tells the story of a girl who disguises herself as a boy to join the Chinese Imperial Army to fight the invading Huns and save her father from going to battle.

Jet Li, who plays the role of the emperor in the film, told Reuters news agency that he is hoping that the audience will love the film “because it’s such a great, beautiful movie”.

But after the film’s livestreaming release on Friday, observers noticed that the film credited several government agencies in Xinjiang. 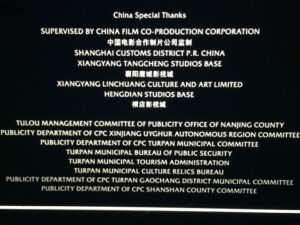 Among those that received “special thanks” was the Chinese Communist Party’s “publicity department” which is in charge of propaganda in Xinjiang.

Jeannette Ng, a writer and novelist from the United Kingdom, posted a screenshot of the film credits on social media, noting that Xinjiang was “the place where the cultural genocide is happening”.

She noted that Mulan “filmed extensively” in the region.

According to news reports and witness accounts, there are several sites in Xinjiang where more than a million Uighurs are being held in what China calls vocational skills training centres, but others have said are detention centres.

Uighurs who have escaped China, have confirmed the existence of the facilities since 2017 and say that many of their relatives have disappeared and remain missing.

The Chinese government has acknowledged their existence, saying that they are part of the programme to fight “extremism” in the northwestern region. 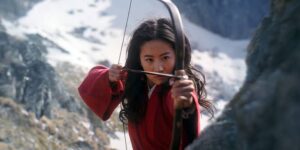 In an opinion piece published in The Washington Post, Asia Society Senior Fellow Isaac Stone Fish wrote that by choosing to film in Xinjiang, the Walt Disney producers were helping “normalise a crime against humanity”.

He called the film “a scandal”, noting that the producers “worked with four propaganda departments” in Xinjiang to shoot the film.

Part of the film was also shot in New Zealand, home of the director, Niki Caro. Reports say the film had a production budget of $200m – the most expensive film ever made by a female director.

Hong Kong pro-democracy leader Joshua Wong said the latest revelation was another reason to boycott Mulan, writing that viewers could become “potentially complicit in the mass incarceration” of Muslim Uighurs.

Wong had earlier called for a boycott of the film following statements from actress Liu Yifei supporting the China-backed government in Hong Kong. He accused her of turning a blind eye to “police brutality” in the territory.

The film has also received mixed reviews, with Filipino film critic and award-winning novelist, Ian Casocot calling it “underwhelming”. Richard Roeper of the Chicago Sun-Times praised it as “beautiful … even in the small screen”.

Walt Disney Studios and Mulan’s director, Niki Caro, have yet to comment on the controversy.