Nigeria At 60: Not too late for Buhari to tackle challenges bedevilling the nation — Sheikh Shafi’i

As Nigeria celebrates its 60th Independence anniversary on Thursday, October 1, the Mufti of Conference of Islamic Organisation (CIO), Sheikh Dhikrullah Shafi’i has called on all Nigerians to thank Allah for sparing their lives to witness the milestone.

Sheikh Shafi’i made the call in an exclusive interview with Muslim News shortly after leading solatul Juma’at at TMC Dawah Centre, Ijeshatedo, Lagos, saying that Nigeria at 60 is no doubt with mixed experiences.

He said, “I want to congratulate all Nigerians on the occasion of Nigeria’s 60th anniversary which is coming up in a few days. We must appreciate the Almighty Allah for His numerous blessings upon us, essentially for sparing our lives till this moment and keeping Nigeria as one. I pray that Allah rewards those who contributed to the success story of Nigeria from the outset.”

The revered Muslim scholar stressed that it is a great feeling that Nigeria, the most populous black nation in Africa, with an estimated 206 million inhabitants as of late 2019, will be 60 this year.

“One thing we should however note is that a man that clocks 60 years of age must have had mixed experiences and such applies to Nigeria at 60. Nigeria has had so many experiences,” he added.

Speaking further, Sheikh Shafi’i appreciated the fact that Nigeria independence was bloodless and based on dialogue unlike other countries in Africa.

He cited the Algerian bloody fight for independence in which no less than 1.5 million persons reportedly lost their lives.

“We knew how we got the independence. It was generally an easy ride compared to the independence of some other countries like Algeria. Blood was spilled and so many lives were lost for Algeria to gain freedom from the colonialists.

“At a conference, the former Algerian President, in his speech, said he was welcoming the participants to a state that got her independence after no fewer than 1.5 million citizens were martyred.

“The same bloody scenario also played out in Libya, with special reference to the great martyr, Omar Moukhtar’s travails in the hands of the Italian colonial masters. Nigeria’s independence, however, differed from those of these countries I just mentioned. We got our independence on the basis of mutual understanding and agreement between the colonialists and our great leaders. The roundtable, rather than violence, led to Nigeria’s independence.”

Sheikh Shafi’i, who is also the spiritual father of The Muslim Congress (TMC), said Nigeria has tried different types of government since independence, asserting, however, that democracy is the best and most stable.

“We’ve practised different systems of government. We had the military, parliamentary and civilian. In the military era, coup was a very prominent trend in the country. In fact, if we are to count countries all over the world with the most experience of coup occurrences, Nigeria will make, at least, the first to third. We also embraced the civilian government and it appears to be the most stable since 1999. Nonetheless, the journey is far from being easy; it’s been tough all along,” he said.

The revered Islamic preacher extolled the late Yar’Adua government for its focus, advising that the present administration takes a cue from it.

According to him, “Since 1999, Nigeria has had four Presidents, starting from Olusegun Obasanjo, Umaru Musa Yar’ Adua, Goodluck Jonathan and the current leader, Muhammadu Buhari who has been at the helm of affairs since 2015. The administration that stands out is that of the late Yar’ Adua. He came up with the 7-point agenda and demonstrated a high sense of responsibility and focus before his death due to illness.

Sheikh Shafi’i however commended the current administration, urging them to be clear and exact on what they have in stock for the people.

“We can see the realities of the democracy we are practising today. So many things still need to be done for the masses. However, we cannot conveniently say they aren’t performing. All governments perform to the best of their abilities, but it’s good for the government to be focused. They need to up their game,” he said.

On the current government

Airing his view on the current administration led by Buhari, Sheikh Shafi’i said it is not too late for the President to address the issues affecting Nigerians so that they will say good about him when he leaves office.

He most especially charged the government on security, observing that it is a basic duty of every government all over the world.

“So, like I was saying, there are crucial areas every government – both the present and incoming- must monitor. First is security. Our security architecture is not that sophisticated. Kidnapping, armed robbery, assassination, cybercrimes are rife in Nigeria, and they do not represent a secure country.

“The second point is health. Government should try as much as possible to provide state-of-the-art health facilities in the country. They should be of high quality and affordable to common people.

“Also, the issue of education and economy. These are the key foundational areas. The Federal Government should be consistent with and consolidate its new economic schemes especially the Micro Small and Medium Enterprises (MSMEs). They should widen the scheme. Similarly, the many loan opportunities championed by the administration should be sustained, especially the non-interest loan. They are part of the positives of the administration,” he noted.

He charged the government to do more on youth empowerment and general well-being of the masses, adding that employment opportunities should be created for the people.

“In addition, is the area of infrastructure: roads, electricity, railways, environmental protection, bridges, public housing and lots more. The government is trying, but their best is not good enough,” he added.

On the increasing agitations for the independence of Biafra and lately, Oodua Republic, Sheikh Shafi’i called on the FG to dialogue with them saying that they are part of the experiences of Nigeria since independence.

He said, “There are so many groups in the country today agitating for independence. The media call them IPOB, Arewa; Oduduwa; Agbekoya; Niger Delta. etc. Despite their agitations over the years, Allah in His infinite Mercy, has united us and we remain one till date. So, on their calls for secession, the government needs to bring them to a roundtable, thrash out issues with them in a peaceful and respectful manner so that they can sheathe their swords.

“This is because when we ignore these deafening songs of war and dismiss them as inconsequential, the aftermath may not be so pleasant. And this won’t go down well for the country. The government should hear out their agitations, examine and work on them. All these should follow a transparent procedure. Thus, the people can judge if the agitations are well-intentioned or mischievous.” 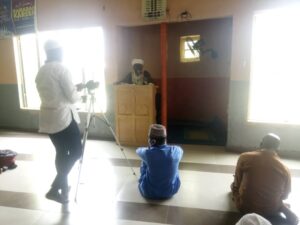 While urging the FG government on dialogue, Sheikh Shafi’i appealed to the agitators who are planning to stage protests on Thursday, October 1, to be patient, adding that organising mass action at this critical stage may create more problems than solutions.

“My view on those planning to protest and stage mass action is to be calm. Allah says in Q3: 200, ‘O ye who believe, be patient, encourage patience and remain cohesive…’. I want those calling for protest to bear with the government. We all know how hard the situation is everywhere. Calling for protest can lead to many unwanted circumstances.

“Also, I urge the government to listen to their agitations and do the needful. There should be mutual understanding. During the dialogue, both parties will have to forgo some interests to reach a consensus. You cannot say you are making about ten requests and the government must oblige all. It’s not possible. Both sides should embrace truce. If crisis breaks out in the country, the masses will be the cannon fodders. So, what exactly is the gain?,” he noted.