Haramain Sherifain has debunked the report of the appointment of a Nigerian-born Saudi based Qur’an reciter, Sheikh Mukhtar Al-Haaj as the Imam of Makkah.

The news of Sheikh Mukhtar who is said to be from Borno State, North-East Nigeria has been trending on social media for days, with many congratulatory messages from his esteemed fans.

Ibrahim Danlami Aliyu is among the people that celebrated the appointment on Facebook, with the announcement:

“A Nigerian of Borno State descent known for his beautiful recitation of the Glorious Qur’an, Sheikh Mukhtar Al-Haaj, has been appointed as an Imam of Makkah Al Mukarramah”. 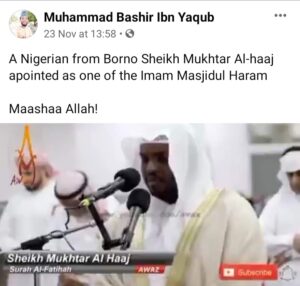 The news of his appointment has been published by some online media including Opera News, which reported that:

“A Nigerian born, Sheikh Mukhtar Al-Haaj who is a great reciter of the Holy Qur’an has been appointed as the new Chief Imam of one of the holiest states in the world, Mecca. As known, Nigerians always go for hajj every year and this would be a joyous news for the Muslims in Nigeria who would definitely be proud of the young man.”

The online medium quoted a Twitter source, Omasoro Ali Ovie @OvieAli and the post has generated thousands of likes from Sheikh Al-Haaj’s esteemed fans. See the tweet below:

A Nigerian of Borno descent known for his beautiful Quran recitation, Sheikh Mukhtar Al-Haaj , has been appointed as an Imam of Mecca. pic.twitter.com/iP3BGQSp3g

Haramain Sherifain has swiftly denied the report in a chat with Muslim News on Wednesday, November 25, saying, “Sheikh Mukhtar Al-Haaj isn’t an imam in Makkah. The news is incorrect.”

When prodded with image of Sheikh Al-Haaj and if he is truly based in the Kingdom, the admin of the Haramain Sherifain, the official media partner of the two holy mosques, said he is not a familiar face. 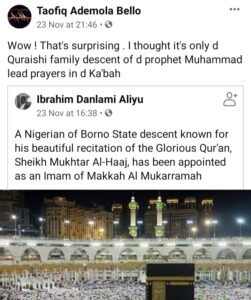 According to the admin who spoke with Muslim News, “No! We don’t know about him. However, he might be an Imam at any other Mosque in Makkah but we are not sure. He definitely is not an Imam of Masjid Al-Haram as some tweets have portrayed.

Efforts to seek further details about Sheikh Al-Haaj proved futile as there is no available record of him (in English, but we aren’t sure if there are any in Arabic) online except series of videos of him leading salat (prayers) with a beautiful recitation of the Quran at a small mosque with some Arabs among the congregants.

Nigerians in Saudi Arabia who spoke with Muslims News also said they haven’t come across or seen Sheikh Al-Haaj leading prayers anywhere in Makkah and its environs.

“There is no doubt, he could be any of the small mosques. If that is the case, it is not really a big thing to celebrate because black people especially from Nigeria can be an Imam in any local mosque in Makkah so far they have the requirements,” said Mal. Ibrahim, a Nigerian student in Saudi Arabia.