Alhaji Abbas is a renowned faith-based  (Islamic) columnist and media professional with experience spanning about 40 years in the industry.

A former staff of the defunct Concord Newspaper owned by the late MKO Abiola, Alhaji Abbas now writes a weekly Islamic column tagged ‘The Message’ for The Nation newspaper where he has been dissecting issues affecting Islam and Muslims in Nigeria and the world for more than a decade.

He came out first in a painstaking and thorough selection process conducted by the National executive of the Muslim Media Practitioners of Nigeria (MMPN) led by Alhaji AbdurRahman Balogun in conjunction with the #MNAwards2020 Committee, chaired by the Publisher, Mr. Rasheed Abubakar.

The Jeddah, Saudi Arabia-trained first class English graduate is the most qualified candidate among the shortlisted names that met the criteria for the award.

According to the statement jointly signed by Alhaji Balogun and Mr Abubakar, “Alhaji Abbas has consistently been in media practice for well over 40 years and had mentored and inspired a lot of young Muslim media practitioners and non-Muslims alike in his sojourn at the defunct Concord and Monitor Newspapers, Vanguard and now The Nation Newspaper.

“Up till date, the veteran journalist maintains a regular weekly column in The Nation Newspaper entitled ‘The Message’ where he x-rays many contemporary Islamic issues albeit some controversial in the understanding and  promotion of Islam and Muslims in Nigeria.

“Topical issues like Islamisation of Nigeria, Nigeria’s membership of OIC, Fulanisation, Zakat Institution, Hijab, Covid-19 and Muslims, Leadership concept in Islam, Death as an inevitable end, the sanctity of Arabic language, Islam and International Politics, etc. have been beautifully presented by him.

“Alhaji Abbas also maintains a daily inspirational talk on Zakat Revolution on social media, the struggle he has been on for over four decades. Till date, he is the Chairman, Nigerian Supreme Council for Islamic Affairs ( NSCIA) Media Committee and also Media Consultant to Muslim Ummah of South West Nigeria (MUSWEN).

“It is equally important to say that Alhaji Abbas is one of the only living Nigerian journalists that has covered five international wars, namely: Iraqi/Iranian war; Western Sahara war, Togo-Ghana war, Libya-Chad war and Somalia war,” the statement concluded.

Speaking on his emergence, Alhaji Abbas said he is indifferent about awards generally, adding that he has turned down countless awards bestowed on him by several organisations and institutions both within and outside the country.

According to him, “I don’t feel anyhow about awards generally. I’m always indifferent to such things. Personally, I don’t take awards. I’ve been given 54 awards, I did not accept any. The only one I would have accepted came from the Sultan of Sokoto and I did not make it known to anybody. So, I’m indifferent,” he revealed.

Alhaji Abbas, whose journalism career began in 1982 however said he would have wished that the Muslim Media Person Award be given to a Muslim media outfit, saying, “I would have suggested Muslim News (the organiser of the Awards). The medium is doing fantastic work for the Muslim community, more than any individual. Muslim News is an institution propagating Islam for the sake of Allah.

“I would have wished such an award is organised by another body and it’s won by Muslim News. The Publisher and his team may not know the extent to which they are performing. They are exceptional and I would have wished the award goes that way. Since that’s their decision, may Allah bless their efforts,” he added.

The renowned Nigerian journalist said he feels personally fulfilled career-wise, adding that, “each time I remember how I came into journalism and what I have done so far, I say Alhamdulillah.” 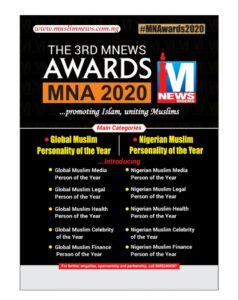 The winner of the Nigerian Muslim Health Person will be announced on Tuesday, February 9, while dates for the presentation of plaques will be communicated in due time.