Barrister Ibrahim Yakubu Umar, the former Attorney General and Commissioner for Justice in Bauchi State, has been announced as the 2020 Nigerian Muslim Legal Person of the Year.

Barrister Umar emerged the winner of the category after a rigorous selection process coordinated by the organisers of the award, Muslim News in conjunction with the National leadership of Muslim Lawyers’ Association of Nigeria (MULAN).

In a statement jointly signed by the newspaper’s Publisher, Mr. Rasheed Abubakar and MULAN National President, Prof. Ibrahim Abdulkadir Abikan on Monday, noted that the winner, Barrister Umar is an Ambassador of Islam and advocate of Shariah legal system, who has impacted positively the lives of Muslims, especially in the law profession, both within and outside Nigeria.

Mr. Abubakar said, during the reviews of nominees and their achievements, the Committee discovered that the struggle to ensure Shari’ah courses are made mandatory and a prerequisite for the department of Common law of UNIMAID in 1983 and got implimented in 1985 through the instumentallity of the then Vice Chancellor, Distinguish Senator Prof. Jibril Aminu, was initiated by the nominee.

According to him, “Although he might have achieved the feat during his time as the President to the Law Students’ Association, the fact that hundreds of thousands of students have been privileged  to study Islamic law and many still benefiting till date is one of the considerations for our choice.

“Barrister Umar, a former Chairman, Nigerian Bar Association, Kano Branch, led many advocacies for Islam in the Nigerian law profession, including the formation of Islamic Legal Aid Group, which metamorphosed to Muslim Lawyers’ Forum, and later gave birth to what’s today known as the Muslim Lawyers’ Association, with active members across Nigeria,” he added.

Mr. Abubakar who founded the #MNAwards award in 2018 said, while some nominees’ achievements are known to the public due to the involvement of the media, adding that, “some however, never bothered or cared about what they tagged media hype. Barrister Umar is among the silent achievers who doesn’t publicise his numerous good deeds, believing that his rewards are with Allah.”

Barrister Umar is otherwise known as one of the forerunners of Shari’ah legal system in Nigeria, who after the implementation in many States of the North, contributed to the shari’ah panel that is existing today in Lagos.

“He has always been an advocate of Shari’ah and been at the forefront of the move for Lagos to be granted full autonomy to practice the shari’ah in the State as provided in the constitution of Nigeria. He personally involves in giving the support and encouragement in the implementation of shari’ah in the entire Southwest region.

“Barrister Umar believes that Muslims as Nigerian citizens have a right to make a choice, adding that the shari’ah as Allah’s ordained law can lead to drastic reduction in crimes and offences if it is sincerely and genuinely practised.

Barrister Umar,  whose immense contribution has been felt several times in his local communities in Bauchi and Kano, expressed joy over his emergence as the 2020 Muslim legal icon. 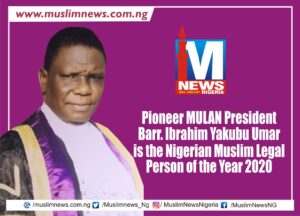 According to him, “I am highly excited about this award. I am happy because so many of us started this struggles long time ago but haven’t been recognised because we aren’t used to broadcasting or celebrating what we have done because we are doing it for the sake of Allah. Therefore, it’s a little bit strange (foreign) but, recognition of great works have been in place since the time of the Sahaba.”

When asked, his most treasured achievement, he said, “I cannot be prouder of any achievement than the achievement towards my religion and contribution for the sake of Muslims in the entire Nigeria through my profession.

By 1980, he got admitted into CT & University of Maiduguri and by 1982-1983, he became the President of Law Students Association of the University and obtained his law degree in 1984. In 1985, he attended the Nigerian Law School, Lagos and was called to the Nigeria Bar as a Barrister and Solicitor of Supreme Court of Nigeria.

A member of many professional bodies including Certified Management Consultant (CMC), A fellow of Institute of Management Consultants (FIMC), International Bar Association (IBA), among others, Barrister  Umar is the founder of a private firm Ibrahim Umar & Co with head office in Kano and Branches in Bauchi and Abuja.

The winner of the Nigerian Muslim Celebrity Person will be announced on Tuesday, February 16, while dates for the presentation of plaques will be communicated in due time.

CONGRATULATIONS TO OUR HERO