Dr. Bakar, the current President of the International Islamic University Malaysia (IIUM), emerged the winner of the prestigious award tagged #MNAwards2020 after a thorough and tedious process that lasted for weeks.

The newspaper’s Publisher, Mr. Rasheed Abubakar, while announcing the winner on Wednesday, February 24, in Lagos, Southwest, Nigeria, said, “The board in charge of selection unanimously settled for this 21st century astute Muslim finance professional, after conducting extensive research on the achievements of so many Muslim finance professionals,” 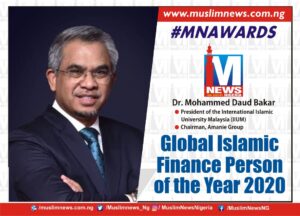 Dr. Bakar, who is currently the Chairman, Amanie Group, has been responsible for managing and leading local and global finance teams in both Islamic and conventional financial institutions, providing company directors with accurate financial information, management accounts and data analysis for policymaking. The respected scholar also dedicates his professional life to the service of humanity.

Mr Abubakar congratulated Dr. Bakar on his emergence, saying it is the result of his long years of service to humanity through his wealth of experience in Islamic jurisprudence and finance.

The Islamic finance guru was engaged by the Central Bank of Afghanistan to come up with an Islamic banking framework for the country, where he has been to about ten times.

Many other scholars invited for the discussion that will birth the banking system declined to grace it as Afghanistan was at the time enmeshed in national unrest.

Dr. Bakar , it was, that placed his life on the line to see to the actualization of the project. But despite his untiring efforts, the Afghanistan parliament is yet to pass it into law.

“We did the work three or four years ago, making sure the Islamic banking laws were neither too strict nor too flexible. I went through everything — word for word, line by line,” Dr. Bukar said, adding that the parliament refused implementation because, “They feel if they passed the legislation without abolishing the conventional banking laws, it would look bad because they would have two systems in the country. But that is a very idealistic perspective.”

He is currently the Chairman of the Shari’ah Advisory Council at the Central Bank of Malaysia, the Securities Commission of Malaysia and the Shari’ah Supervisory Board of The International Islamic Liquidity Management Corporation (IILM).

Dr Bakar has published a number of articles in various academic journals and made many presentations in various conferences around the globe.

He is a Shari’ah board member of the Dow Jones Islamic Market Index (New York), Muzn Islamic Banking (The National Bank of Oman), BNP Paribas (Bahrain), Morgan Stanley (Dubai), Bank of London and Middle East (London), amongst other financial institutions.

Having built a base with his shari’ah advisory, Dr. Bakar is expanding into other areas. He now owns a business magazine (Malaysian Business) and a financial technology company (MyFinB). He has converted some other shari’ah consultancy offices to trading companies. He established Ski Resort in Casablanca as he also plans on building hospitals, oil and gas companies in various parts of the world where he deemed having advantages to serve humanity.

Dr Bakar has teamed up with many small businesses, especially those in the IT sector in order to penetrate markets and go for a franchising model to sell his products overseas.