Governor Seyi Makinde of Oyo State has reinstated the erstwhile cancelled Hijrah holiday and pledged that during his administration, Oyo State will celebrate the Mawlidun Nabiyy holiday (birth of Prophet Mohammed [SAW]) alongside the rest of the world.

“So, this year when the S.A Islamic Affairs reached out to me concerning the Mawlidun celebration, he proposed a big gathering and I agreed.

“Now, we know what is right and I am pledging that from this day forward, we will hold the Mawlid celebration together with the whole world.”

”Also, by popular demand from the Muslim scholars including the Chief Imam and the people of Oyo State represented here (at the event), we are reinstating the Hijrah holiday.

“We will also observe Hijrah as a public holiday here in Oyo State.”

He said, “Some people have questioned why I didn’t allow girls to use hijabs in school. I am here to say that since I took over as the governor of the State, there has been no government policy that prevents girls from using hijabs.”

Finally, the governor called on residents of the state to contribute their quota to make sure that the peace and security committee that was recently inaugurated works effectively. 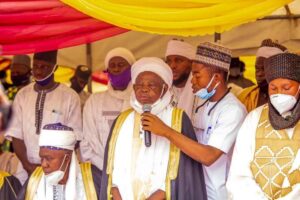 He said, “I want to urge everyone present here today to contribute their quota to make sure that the peace and security committee that was recently inaugurated which includes our religious, traditional and political leaders work effectively.

“Whenever a report gets to me from the committee, whatever is necessary and needed will be done.

“Don’t be afraid because the governor is doing everything to ensure the safety of every citizen and resident of Oyo State.

“Let’s cooperate with this administration to work towards the growth and development of the state.”