by Muslim News Nigeria
in Salah
0

At a time when many Nigerian Muslims, especially the scholars in the Southwest are taking delight in hauling insults on one another, shamelessly trading blames on social media, and needlessly engaging in unending arguments; some are distinguishing themselves by strengthening the bond of Brotherhood and unalloyed love among themselves, as well as displaying mutual respect as taught by Prophet Muhammad, SAW.

This is the case of the relationship between Shiekh Jubril Moshood Ramadan, an astute scholar, a leading Markaziy, and Mudeer (Founder) of Markazu -s- Salam and the renowned Sheikh Dhikrullah Shafii, the Grand Mufti of the Conference of Islamic Organisations (CIO) in Nigeria. 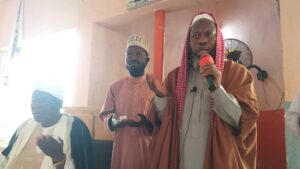 How did this happen?

On Friday, April 2nd, 2021, Sheikh Jubril Ramadan had led a delegation to pay an unscheduled visit to his fellow scholar, Sheikh Shafii at the popular Dawah Center, Ijeshatedo, Lagos. It was around the time Sheikh Shafii was set to mount the minbar (pulpit) for that day’s Khutbah (sermon) but out of honour and respect, he prevailed on the visiting Sheikh Ramadan to lead the Jumu’ah prayer.

Sheikh Ramadan is not only an Islamic scholar par excellence, he is a top gun among the Markaziy – (products/alumni) of late Shaykh Adam Abdullahi El-Ilooriy, the founder of the famous Markaz Arabic and Islamic Institute, Agege. He expressed appreciation to Sheikh Shafii for honouring him to lead the Jumu’ah prayer which was held in strict compliance to COVID-19 regulations, just as he walked the congregants through a memorable spiritual journey with his soul-inspiring lecture. Watch it here, as captured by Muslim News Nigeria HERE  and below. 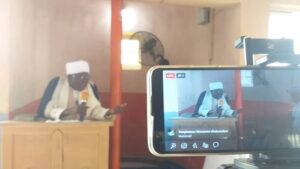 At the end of the prayer, Sheikh Ramadan remarked, “The love I receive from Sheikh Shafii’ has always been massive. He offers me respect and honor which has always been mutual. On my part, I don’t harbor grudges or hate. I believe that’s how Sheikh Shafii also is. I only came visiting but look at the honor he accorded me.

“I was actually invited to the conference organised by the Conference of Islamic Organisation a few days ago, but I was unavoidably absent because I had an important assignment in Abuja. I saw my unavoidable absence as not good enough given the massive love I have always been shown by the organisation, particularly Sheikh Shafii. So, I had to make up for it by appearing here today to tender apologies and pray with the congregation. 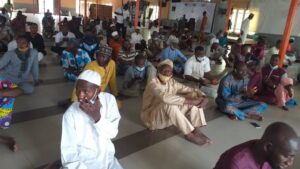 “To my surprise, Sheikh Shafii demanded that I lead the Jumu’ah prayer. I turned down the offer, but he insistent. I thereafter considered this a great honor and show of true love.

“I want to appreciate most sincerely Sheikh Shafii and the entire congregation for this. This is how true scholars and callers should behave.

Responding, Sheikh Shafii showered encomiums on his guest, saying, only God can reward Sheikh Ramadan for the profound knowledge he shared with the congregation. 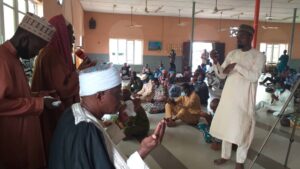 “I appreciate the visit of our father, the proprietor, and founder of Markazu -s- Salam. By every standard, he’s far above us in age, experience, and knowledge. Nevertheless, he has honored us with this visit. May the Almighty Allah also honor him. You are already a forerunner, may Allah continue to elevate you,” he concluded.

This is the type of genuine love we (at Muslim News Nigeria) expect from all Islamic scholars irrespective of their ideological leanings. Scholars must exhibit love and maturity among themselves even in the face of disagreements. They should not use the opportunity of the minbar and their privileges to cause a rift and nurture enmity among Muslims; rather, they should unite not only their followers but the entire Ummah. 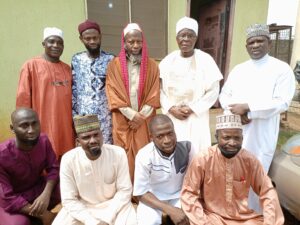 Allah says, “The believers are but one brotherhood, so make peace between your brothers. And be mindful of Allah so you may be shown mercy.” Qur’an 49: 10