I feel great and good because taekwondo allows me use of the Hijab.

The Hijab-wearing Muslimah, Aminat Idris, has cleared the air on her participation at the ongoing 2020 National Sports Festival with an 8 months pregnancy following concerns from many of her esteemed fans on social media.

The news of Aminat, a female taekwondo athlete, hit the airwaves on Monday after winning three medals for Team Lagos in the Poomse event at the tournament holding in Edo State.

Many people who celebrated her feat also expressed their concerns over what they described as “suicidal mission”, for a heavily pregnant woman in her present state competing in taekwondo.

“Do you people mean ‘heavily pregnant'”, Kareem Tunde asked, after reading the report on Muslim News, saying, “women of her status shouldn’t have been allowed to compete in the first place. We just like allowing abnormalities in this country. Anyway, congrats…”

It’s a physical demonstration, not combat

But, the Hijab-wearing Muslimah has clarified her participation in the competition, saying she won the medals in Poomse event, which requires only physical demonstration without combat.

Addressing the speculation, the gold medalist told Muslim News exclusively on Wednesday that taekwando is a branch of martial arts, which also has Karate, Judo, Kungfu, Kick-boxing, among others.

According to her, “So, the first thing that comes to many people’s mind when they hear taekwondo is fight. Like, it is a combat. This is not so. There is more to taekwando than just the fight or combat. A lot of people don’t know about this. I think, that’s why they were scared or worried about me and the safety of the baby.

“Well, the event I am participating in is called ‘Poomse’ in taekwando. It is demonstration. Demonstration of forms, hands and legs technique. It is just to step on the mat and demonstrate, then the judges will score you according to your performance. That is what it’s all about,” she clarified.

Mrs Idris said her husband, Mr. Nurullah Matepo didn’t only give her permission to do taekwondo, he is her number one supporter of the game at the tournament.

According to her, “My husband has been very supportive. Before we got married, taekwondo is something I have been doing and he used to do as well. So, he has an idea of what taekwando is all about and he understands that I am still very much active because he believes it’s not harmful, even with pregnancy, one can still participate.

“So, it wasn’t a big deal accepting or giving me permission to go ahead even after Nikah. Alhamdullilah! He has really been very supportive. His parents and his family members have been supportive. There were days he will be the one to wake me up, take me down for training, stay with me all through just to make sure I am fine.” 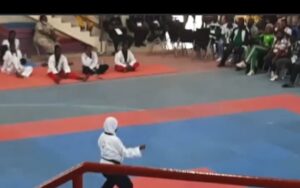 The Hijab-wearing Muslimah also took us through her journey into the world of taekwondo, saying her father, Alhaji Idris and her other siblings inspired her to love the game more than other sports.

She said, “Well, it’s been Allah all the way, Who has taken me this far. It’s not an easy task. Taekwondo is an art I was born into. My father is a taekwondo coach and I have other siblings who are taekwondo athletes. I got motivated by them and they have been supportive.

“I would have loved to play football, tennis and others but because of the modesty of the art, the uniform, discipline and defense of the art itself, of not just being a Muslimah but as a female, we have cases of abuse, harassment and lots more across the country, I feel enough reason to go into the art. Maa shaa Allah, I feel very excited to be part of the Muslimahs propagating Islam through sport. Alhamdulilah”.

Preparing for the NSF

The gold, silver, bronze medalist also spoke on her preparation for the NSF, which begins on March 22 in Benin City.

She said, “I started preparing for the tournament a long time ago. The festival should have been held since last year, if you observe, it is tagged Edo 2020, but due to the Covid-19 pandemic, that’s why it had to be postponed up to this moment.”

As for the change in her name, Ms Idris explains; “I am Mrs Amina Matepo, that’s my surname now because that name has been registered before I got married for the tournament so that’s why the name is still there.

Alhamdullilah, my husband, my in-laws, my mother, they have been very supportive, mashallah and I am really grateful because without God, without them, this feat wouldn’t have been possible. Alhamdullilah”.

When asked about her challenges and how she overcame them, she attributed the triumph to her Creator.

“About challenges well, I will keep saying Alhamdullilah Robil Alamin. It’s been Allah because at a point I thought I won’t be able to. I almost gave up trying, but as Allah will have it, it happened, it has happened, Alhamdullilah I am fine, I am good.”

Being an Hijabi in taekwondo

Ms Aminat also spoke about being a Muslimah, saying that she feels great and good because taekwondo allows her use of the Hijab.