US Terror Watch List: Truth about the fake news on Dr. Pantami’s ties with Boko Haram

The Nigeria’s cyber space has been awash with unverified report that the country’s current Minister of Communications and Digital Economy, Dr. Isa Ibrahim Pantami is reportedly placed on the US terrorist list for alleged ties with Boko Haram.

The news which was first published by some unreliable blogs last week started trending on twitter on Monday, with many critics calling for the immediate arrest of Dr. Pantami, saying the United States which they claimed is watching the Minister’s alleged sponsor of terrorists doesn’t lie.

As at the time of filing this report on Monday, no popular or top mainstream or online media had published the news, except Daily Independent and NewswireNGR an online medium known for criticizing President Buhari’s government.

Daily Independent featured image to the story published online, with the headline, ‘Disquiet As America Places Nigerian Minister on Watch List’ had the edited old picture of Dr. Pantami holding the Noble Qur’an, with a photoshoped background black flag of the dreaded boko Haram terrorist group. 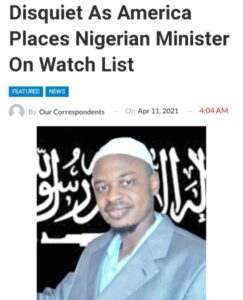 The news of the accusation against the Minister, which was also shared on several other platforms including nairaland, is but without any verifible fact or official communication traceable to the United States or any of its agencies.

A quick search into the US department of State’s website showed the names of current countries (such as Cuba, Iran, North Korea, etc) and individuals designated on the terror watch list, without the name of the Honourable Minister.

Muslim News reached out to the US Embassy in Nigerian and US department of State, seeking for clarification on the allegation against Dr. Pantami, one of the most active Ministers in the President Buhari-led government, but no response as at the time of filing this report on Monday, by 3: 35pm.

The content of the mail goes thus, “We’re Muslim News, Nigeria’s most authoritative Islamic newspaper. There is an unverified report circulating on social media about the current Nigeria’s Minister of Communications and Digital Economy, Dr. Isa Ibrahim Pantami, allegedly being on the list of America’s most wanted terrorists.

“Another report said it’s a list of persons with ties with boko haram and al-qaeda. How true is this claim, please? We’ll be very glad if you can attend to our enquiries as a matter of urgency or refer us to the appropriate quarters. Thank you and do have a blessed week ahead.”

While waiting for the response from the United States, checks by Muslim News showed that Pantami, a renowned Islamic Scholar has been a staunch opponent and critic of Boko Haram, the terror group that has wreaked havoc on Nigeria, killing indiscriminately, both Muslims and non-Muslims.

An old video of the young scholar, Pantami surface online in a fierce debate with the late Muhammad Yusuf, founder of Boko Haram, over western education. This video, conducted in Hausa debunked one of the claims that the Minister has ties with Boko Haram.

In this quick fact-check, I was able to verify to non-Hausa speaking people misled by the resurfaced video of @DrIsaPantami speaking with the founder of Boko Haram, that it was a religious debate in which Pantami was against the Boko Haram doctrines.

This unfounded allegation, according to many analysts is the opposite of Pantami’s relationship with the group, whose factional leader, Abubakar Shekau threatened in February 2020, calling on his followers to kill the Honourable Minister.

Carriers of news like this, observers said, should not be spared, especially now that Nigeria is fighting to curb the spread of fake news, which has eaten deeply into the fabric of the country.

“The Minister, Pantami should SUE them without accepting apology! He should hunt every single influencer that tweeted, retweeted and shared the fake news, gather them all in a single class action, sue them all. Every website or blog that published the fake story, hunt them, gather them all in one suit, and sue their life! That’s the best way to serve as deterrent to others,” Abdullahi Abdulganiy, stated.

Sheikh Isa Pantami @DrIsaPantami is a Lecturer in Saudi. The Fake News about the US Government designating him an enabler of terrorism is even more laughable if you know how the Saudis swiftly arrest and 'torture" anyone with ties to Boko Haram and Al Qaeda.