The show of love among Islamic scholars was exhibited between the renowned Zimbabwe Islamic scholar, Ismail ibn Musa Menk, also known as Mufti Menk and another scholar, a Texas, US-based Dr. Muhammad Salah.

Dr. Salah, who is currently in Nigeria to spread the message of hope at the 1Ummah Eeman Booster event had earlier posted a picture of himself in the traditional Nigerian Muslim/Northern cap with the caption: 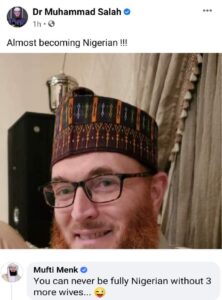 The post has attracted thousands of likes and comments online including what looks like pun by Mufti Ismail Menk, who is equally in Nigeria for the same event held on Saturday, April 24, at A-Class Event Centre, Abuja

“You can never be fully Nigerian without 3 more wives”, with the emoji 😜.

This subtle shade from Mufti Menk has seen over 12,000 reactions and comments as monitored by Muslim News, with many following the joke with hilarious comments. 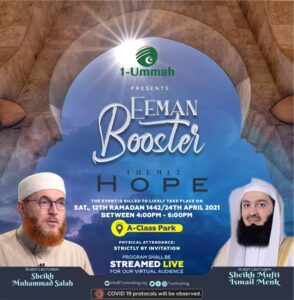 A commenter even attempted a shade at Mufti Menk asking how many wives does he also have.

Mufti Menk how many do you have? – Huttie Unomie

Read some comments below:

Mufti Menk I will give him one in Maiduguri. 🤣 – Alibe Babangana

Mufti Menk 😂😂😂, that’s the only sunnah many take too serious – Oasim Oladoye

Ismail ibn Musa Menk, is also a motivational speaker and head of the Zimbabwe’s fatwa department. He has been named one of The 500 Most Influential Muslims in the world by the Royal Aal al-Bayt Institute for Islamic Thought in Jordan in 2013, 2014 and 2017

As for Dr Muhammad Salah, he is the “religious adviser” and presenter of one of the world leading Islamic channels, ‘Huda TV’ which has been broadcasting on satellite since 2005.

Dr Salah who was a lecturer at Al-Azhar University and Islamic University of North America, holds a BA in Pharmacy, a BA in Islamic law, Masters degree in Dawah and PhD in Islamic Studies and Fiqh.