Ooni of Ife reminisces his mixed religious background, as he reveals his Muslim name

His Royal Highness, Oba Adeyeye Enitan Ogunwusi Ojaja II, the Ooni of Ife has described the Yoruba culture as the strongest binding agent for both Muslims and Christians.

The Ooni of Ife made the disclosure on Wednesday during his goodwill message monitored by Muslim News at the launch of the book, titled, ‘Islam in Yorubaland’ a project of the Muslim Ummah of Southwest Nigeria (MUSWEN) which was held in Lagos.

At the event which was also attended by the Sultan of Sokoto, Alhaji Abubakar Sa’ad III; Oluwo of Iwo, Oba AbdulRasheed Adewale Akanbi, other royal fathers and dignitaries, the Ooni of Ife revealed his Muslim name, saying a lot of people do not know he has one.

Reminiscing his mixed religious background, the respected monarch said his late mother beared Sidikatu and was a Muslim. 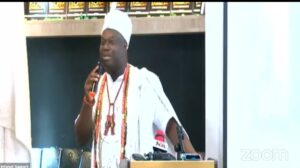 According to him, “If you look at our culture in Yorubaland, it’s the strongest binding agent for all. You see intermarriage between various religions. You don’t see it anywhere in the world. I haven’t seen it in Yorubaland where people kill themselves or burn their houses because of their religions. We have our differences, but the truth be told, our culture is strong and plays a noble role in everything we do.”

Oba Adeyeye recalled that President Muhammadu Buhari had also wondered why Yorubas do not fight themselves even when they are evenly divided as Christians and Muslims.

The royal father said it was due to the grace of God and the rich Yoruba culture.

Revealing his Muslim name, Ooni said, “My mother, of blessed memory was Sidikatu. A lot of people didn’t know that I come from that background and a lot of people don’t know I have a Muslim name… But I will tell you today. My Muslim name is Ismael…”