The writers of this Turkish series, ‘Uyanış: Büyük Selçuklu’, meaning ‘Guardians of Justice’ actually gave us a clue on how a unified Muslim army can reclaim masjid Aqsa from the terrorist Israel, the same way the fearless Malik Ahmet Sencer, the son of Sultan Malikshah singlehandedly ignited the fire and that led to the liberation of Selemzar, in this week’s season 1, episode 31.

Melik Sencer stood before the Muslim army, and address them in preparation for the battle of liberation, as his brother, Melik Tapar, looked on:

“Come on the brave ones. Now it’s time to attack Selemzar. Today, we will either be martyrs, or ghazis. In the end, we will place our victory Sanjacs over Selemzar…”

Soon, he and his brother realised that the majority of the Muslim army was poisoned, an evil plot orchestrated by an enemy within to prevent them from attacking the enemies and liberating Selemzar.

Yet, Malik Sencer didn’t give up even as his brother, Tapar thought the battle should be postponed. He was optimistic as he addressed the army again:

“The enemy might be bigger in number than us. But as the wolf attacks, it doesn’t think about the flock. I will keep my oath and attack alone if I have to. Those who are loyal to their oath (to liberate Selemzar), those who accept to fight until their last breath, come with me. I give my blessing to those who don’t…” 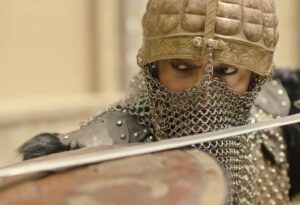 He climbed on his horse, riding towards the castle in order to open the gate for the Muslim army. We wondered if anyone was ready to follow him…

While riding, a voice was reciting the verse of the Qur’an, from Surat 8:16

“O believers, when you face disbelievers in battle, never turn your backs to them. And whoever does so on such an occasion, unless it’ll be a maneuver or to join their own troops, will earn the displeasure of Allah and their home will be Hell. what an evil destination”

The remaining soldiers became worried and said among themselves; “we must follow our Melik even if he is riding to his death. Come on men…” They were inspired and motivated by his courage, including his brother, Tapar. That’s how the plot of the enemy to stop Muslims from fighting failed…

“You didn’t kill them in the battle. Allah killed them.You didn’t shoot the arrow, Allah did. And He did it to give a marvellous gift to His believers. Surely, Allah is All-Hearing, All-Knowing.That’s His gift …Quran 8:17

Allah always ruins the plans of the deniers

The battle will continue in episode 32 to be released on Monday, in shaa Allah. We at Muslim News Islamtaiment recommend this interesting series to all our esteemed readers and fans. We also suggest that our fans study very well the Tafsir of Surah Anfal (Quran 8) which articulates general standard of war (Jihad) and was revealed to Prophet Muhammad after the success of the battle of Badr.

The Guardians of Justice are among the top three Turkish series on our radar. The first and second best remain Dirills Ertrugul and Kurusul Osman, also currently showing on osman.co.uk. Remember the Palestinians in your prayers and do have a lovely weekend.