Buhari, Zulum, Pantami, others mourn as Gen. Attahiru, 10 other officers buried amid eulogies in Abuja

The remains of Chief of Army Staff (COAS), Lt- Gen. Ibrahim Attahiru and 10 other officers, who died in the ill-fated crashed NAF aircraft in Kaduna Friday, were buried in Abuja Saturday.

The family members, friends, colleagues and sympathisers wept uncontrollably as their remains were laid to rest at the National Military Cemetery Abuja.

The interment followed funeral services at the National Mosque and Nigerian Air Force Protestant Church, after the bodies were received at the Nnamdi Azikiwe International Airport.

Bodies of the late COAS and five others were brought by military ambulances to the national mosque for the funeral prayers (janazah) that took place immediately after zuhr prayers, around 1: 30pm. 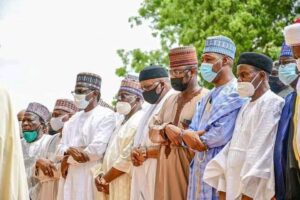 Speaking, the Chief Iman, Dr Ahmad Onilewura, urged everyone to be mindful of death, adding that “it is only God that knows when and how anyone would die”.

He prayed for the souls of the departed to find peace in eternity.

President Muhammadu Buhari, who was represented by the Minister of Defence, retired Maj.-Gen. Bashir Magashi, at the funeral, eulogised the late Attahiru and other officers, who died with him.

Buhari said that the late army chief was a dedicated and committed officer, who died when his services were most needed. 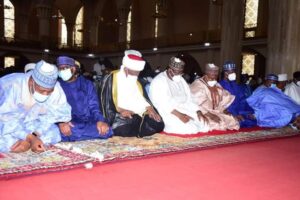 He said that late Attahiru had demonstrated a high level of commitment as well as inspired courage and confidence in the officers and soldiers of Nigerian army.

“Today is indeed a trying moment for the Nigerian army and indeed the armed forces of our country, a period that witnessed the death of 11 brave officers and men of the armed forces in an ill-fated plane crash in Kaduna.

“These were absolute gentlemen and were one of the most disciplined officers and men who sacrificed their lives in the service of the nation and they will never be forgotten.

“These fine gentlemen had a glorious career in the armed forces in the course of which they served gallantly in several capacities,” he said.

In his comment, Borno Governor, Professor Zulum said the late chief of staff was evidently committed to the fight against Boko Haram and was determined to significantly contribute to ending the insurgency.

According to him, The commitment of the late chief of army staff to the fight against Boko Haram was very obvious. Within the short time he served, he had been to Borno on multiple occasions, meeting operational commanders and troops at battle fronts.

“In all his interactions, he regularly motivated troops. The people of Borno thank him and all our gallant fallen heroes for their unquantifiable service to Borno and rest of Nigeria” Zulum said.

O Allah, forgive them and elevate their station among those who are guided. Send them along the path of those who came before, and forgive us and them, O Lord of the worlds. Enlarge for them their graves and shed light upon them in it. 🤲

The Minister of Communications and Digital Economy, Dr Isa Pantami said the country would miss Lt. Gen Attahiru for his patriotism and commitment to end insecurity in Nigeria.

He therefore offered a prayer for him and other fallen heroes who lost their lives to the air crash, saying;

“May the Almighty Allah forgive and be Merciful to them (COAS Lt Gen I Attahiru & Co). May He (SWT) accept our funeral prayer and du’ah for them.”