I feel sad for Bala Hatun and even hours after watching the new episode 60 of Kurulus Osman, I keep thinking about the kind of sadness Osman Bey brought upon the person he loves the most (Bala Hatun), upon his decision to marry another hatun (woman), named, Malhun. Admittedly he has very tangible reasons to marry another wife, and Bala also knows and agrees willingly, just because she loves and wishes her Bey all the best in life. Yet, she couldn’t hide her sorrow, even on the Nikkah date.

While Osman, his new wife, and guests including Bala’s father, Sheikh Edebali, who is interestingly Osman’s teacher and spiritual guidance, were having a nuptial celebration, wining and dining, Bala was nowhere to be found! She buried herself in her tears right in her tent. The young and beautiful Bala’s eyes were heavy with tears – perhaps, of sharing her man with another woman. To her disadvantage, the new woman will give birth to the heir that will continue the Othmanic bloodline. So, the fear of losing that love set in, and of course, it wouldn’t be like before again! 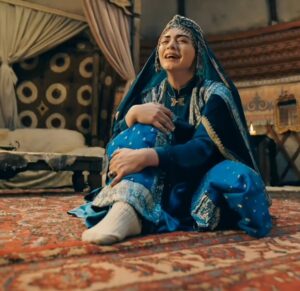 In life, some people are happy, at the same time, some are sad. Even within the same family, among siblings! Pathetically, good people sometimes suffer pain and we (as human) think they don’t deserve. Yet, life goes on! Of course, Osman didn’t stop the wedding feast, for the sake of his first wife. I doubt if he knows that she was busy crying throughout the celebration, except if it’s a Turkish tradition for the first wife to be secluded in her room during that period.

But come to think of it, what is the fuss about mathna? To the women, is there any big deal in sharing your man with another woman in a halal way? LoL 😆 I think, beyond that, Bala was sad because she couldn’t give Osman an heir. If she had 1, 2, or 3, Osman, like his dad, Ertrugul Ghazi, wouldn’t have gone for another Hatun. We saw that playing out in Dirilis Ertrugul season 3, when Halime jealously guided her man, from getting married to Aslihan Hatun.

Unlike Bala, Halime was able to pull through because she already gave Ertrugul two bouncing baby boys (Gunduz and Savci), and later, she welcomed Osman, shortly after she passed on (in the film, according to Mahmet Bozdag’s narrative, even though she lived longer than that in real life).

I think infertility on the side of the wife should not be the only major determinant for the man to marry more than one wife in line with his religious belief. Like some people would say, what if the new wife fails to give Osman an heir (even though she will in the future episode), would he (Osman) marry another Hatun? In my opinion, any willing and capable man should go for more (without exceeding 4), irrespective of whether the first wife gives birth or not.

As a fan, I sincerely sympathise with Bala, the character played by a young Turkish actor, Özge Törer. It’s just a film, but it is the legendary Osman’s real-life story.

That’s why I wrote in the beginning that I feel so sad for Bala, plus the fact that she looks younger than the second wife, Malhun, who had in previous episodes showed her arrogance to Bala because she is a daughter of a Bey.

The most interesting part of the story is that despite her sadness, Bala didn’t curse her husband, who was just 21 when he took the Beylic of Kayi, or the new wife, like many ‘overzealous’ first wives, would have done especially in this part of the world. When she finished crying, she took her praying mat, observed #nafilah, and prayed to Allah to ‘suppress the fire in my heart’ and ‘give my Osman Bey the children he has been longing for. Grant my Bey children who would be worthy of his State. Ameen.’

I think she will not suffer, just as Osman Bey has promised to be just and fulfill his duties in managing two hatuns. I join the millions of fans worldwide to wish them a beautiful married life in the subsequent episodes. 😊

I will dedicate another time to talk about the richness of Kayis (Turkish) traditional weddings. It makes some sense compared to the borrowed foreign wedding we do nowadays. So entertaining, colourful for those of us who attended it on Wednesday night in Söğüt (via our screen), in modern-day Turkey. 💕 😘