The 568th anniversary of the conquest of Istanbul was celebrated with a visual feast in the Turkish metropolis.

Turkey’s Communications Directorate organised a visual feast in cooperation with the Culture and Tourism Ministry to mark the anniversary of the conquest of Istanbul that changed the course of history.

Following the recitation of the 48th chapter of the Muslim holy book of Quran, Surah Al-Fath — meaning Victory or Triumph — in Hagia Sophia Grand Mosque, the celebrations continued with the virtual sky mapping show that was used for the first time at Galata Tower and Hagia Sophia, a symbol of the conquest. 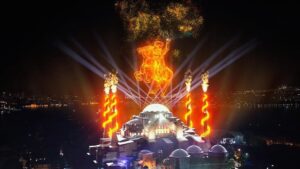 The image of Fatih Sultan Mehmed Han (Mehmed the Conqueror) — who conquered Istanbul at the age of 21, and turned the Ottomans into a world empire — on horseback was also featured in the show.

Earlier, Communications Director Fahrettin Altun on Twitter said Istanbul will celebrate its holiday “with all its splendor.”

Last night, 🇹🇷 Turkey commemorated the conquest of Istanbul by Sultan Muhammed Alfatih on this day, 29 May 1453 by having a laser show above Aya Sofia mosque displaying the verse from the Quran 📖

The light show also displayed the year of the conquest, the islamic symbol of Turkey (the crescent & star), and Sultan Muhammed with the 4 minarets illuminated (which was built on Aya Sofia). 🕌

For Muslims, this is not just an ordinary city conquest, but it is a fulfillment of a prophecy by the Prophet ﷺ . It happened 850 years after the Prophetic narration, 28 generations trying to achieve this, from the time of the companion Abu Ayyub Al Ansari to the Ummayads, the Abbasids, the Seljuks, until the descendants of Osman Gazi achieved it! 👳🏻‍♂️

Muhammed Alfatih learned this Hadith at the age of 9 from his Shaykh, Akshemsiddin, who was responsible to teach him all islamic sciences. It took 12 years for him to train, study, and execute his plan! 📘

We were always taught this was the work of one man, but in reality, it is the collective work of thousands of Muslims over many generations!

Seljuk Alp Arslan bringing Islam to Turkey in 1071, Ertugrul getting strategic lands from the Byzantine empire in 1256, his son Osman putting the nation’s foundation in 1299, his son Orhan building the first capital Bursa in 1326, his son Murad opening East Europe to surround Constantinople, his son Beyazid building the Anadol fortress on the other side of Constantinople in 1394, and Murad II, the father of Sultan Fatih weakning the city walls in 1422, and raising his son to be finally the one to execute the final step of a long process over centuries! ⏳

Just a couple of decades ago, the celebration of anything Ottoman would have been impossible, and even grounds for a military coup by the secularists. This shows a big change in Turkish society today and the revival of Islamic heritage! ☪️

The man who bought all the Europe to his knees. The momentum he created in fighting the europeans lasted for two hundred year. Today 29th of may Fatih entered the city as the conqueror completing the prophecy.Abu al khairat Sultan Mehmet al Fatih #istanbulunfethi #Fetih1453 pic.twitter.com/4yITc6WGif

Today, Turkey remains the only Muslim country that celebrates their islamic conquest and not just their nationalistic independence day! 🎆

May Allah make the story of young Sultan Muhammed Al-Fatih an inspiration to all future generations of Muslim kids, parents, and educators! 🤲