More Nigerian activists are demanding the inalienable rights of the Palestinians, saying that the Israeli's continued eviction and illegal expansion activities has killed the 'two-state solution' dream...

▪︎ Urge FG to severe relationship with Israel over Palestine

Leaders of faith-based and human rights organisations in Nigeria are calling on the United Nations and all people of good conscience to protect the Palestinians rights to lives and property.

The groups made the call at a joint press conference, in Lagos, South-West, Nigeria, on Sunday, saying wanton killings of innocent Palestinians, destructions of property and illegal occupation by the Israeli government must be discontinued.

The leader of the coalition, Waheed Atoyebi, who is also the head of Muslim Awareness International (MAI) said, “It is with a broken heart that I express my concern, on behalf of other Nigerian organisations and speak against the open violation of human rights and international laws by the Israeli Occupation forces in Palestine.”

Some of the organisations include the The Muslim Congress (TMC), Muslim Students’ Society of Nigeria (MSSN), Muslim Public Affairs Centre (MPAC), Guild of Muslim Professional (GMP), among others,

The MAI Director vehemently condemned Israel’s continuous violation of human rights and war crimes being committed in Palestine including the recent 11-day bombardment.

According to him, In recent events, about 264 Palestinians were killed including 65 children. The UN says at least 10,000 Palestinians have been forced out of their homes in the Gaza Strip.

“The lives of Palestinian children in the West Bank, including East Jerusalem and the Gaza Strip have been heavily affected by the presence of Israeli occupation forces and checkpoints since the 6-day war of 1967 between Israel and Arab States. 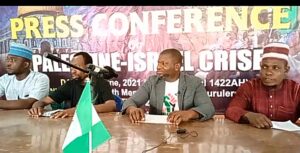 “The assault being committed by Israeli occupation forces is no respecter of religion or territory. As it destroyed the Muslims sanctuary, so it destroyed the Christians’ holy places. Both Palestinian Muslims and Christians are being murdered by the Israeli forces.

“They kill, maim, destroy and violate international laws and human rights of others without being brought to book and if at least one percent of the crimes committed by Israel is being committed by any other people, the US and the UN will cry foul,” he added.

Atoyebi therefore called on the US to stop giving unconditional support to Israel to continue its illegal activities in Palestine, thereby calling on United Nations to do the needful by bringing Israel to book and establish the sovereign nation of Palestine.

– Israel, US killed the proposed ‘two-state solution’ before it commenced

The Head of Human Resources at the Organisation, Azeez Adenle said the proposed ‘two-state solution’ would have been the best way to end the Israel-Palestine decades-long conflict if the state of Israel adhered to the 1993 Oslo Peace Accord.

He, however, noted that the continuous eviction of Palestinians from their homes in East Jerusalem and illegal expansion of Jewish settlements in West Bank by the Israeli government will not make the idea of a two-state solution a reality.

He said, “I have heard analysts and diplomats talking about a two-state solution as the way out of the Israel-Palestine crises, but I asked them, how can a two-state solution be achievable when the occupier ‘the state of Israel’ ignores international law, continues to occupy and expand?

“As at the time of Oslo Accord of 1993 which marked the commencement of the idea of a two-state solution, all of a sudden, Israel pulled out and also influenced its biggest supporter, the US, to do same, because the two-state solution will put a stop to 1] the occupation of Palestinians territories and 2] bring about return of lands that were already currently illegally occupied by Israel.

“It’s part of the agreement of the two-state solution that they (the two countries) will have to go back to the borders of Israel and Palestine as far back as the 1967 war,” Adenle said, asking, “Is Israel ready to go back and honour the previous agreement, giving up on all the lands it has usurped?”

The Palestinian rights advocate stated that there can never be any reasonable process in achieving two-state solution if Isreal continues its illegal settlements activities in the West Bank and forceful eviction of residents of Sheikh Jarrah district in East Jerusalem.

According to him, “As we speak, territories belonging to Palestine are currently being occupied gradually by Israeli settlers and going by what is on ground now, it will be absolutely impossible to have a two-state solution.” 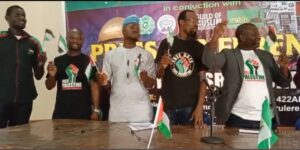 Speaking further, Adenle said it’s part of the two-state solution agreement that East Jerusalem will be a future capital of Palestine but the recent crises started from the region and Palestinians are being evicted gradually from their homes and Israel is practically stealing them for settlers.

READ ALSO...  There is a connection between Amotekun and call for Oduduwa republic - MURIC

“What is going on in that part of the region, which is supposed to be the future capital of Palestine is ethnic cleansing and if this continues, the whole of East Jerusalem will over time be occupied by Israelis and by implication, such an important area can no longer become future Palestinian state, where she lives side by side with Isreal.

“In fact, the Golan Heights which is supposed to be Syrian territory has been officially recognised by the US in 2019 under Trump administration as part of Israel. That means, on the US’ map, Golan Heights now belongs to Israel, but it’s decision contravenes international laws, especially the Security Council Resolution 497 of 1981. These are some of the factors mitigating the two-state solution.

“Of course, the Palestinians will love to have a state of their own, but does the occupier want those that have been occupied to be free? If we want a two-state solution, Israel must discontinue the illegal occupation and forceful eviction of Palestinians. They should withdraw from all the stolen lands and go back to the border before the 1967 war before we can start talking about a two-state solution,” he added.

Nigeria should severe relationship with Israel over Palestine

“The Buhari-led administration should continue to maintain the past foreign policies of Nigeria in terms of unrestricted support for decolonization as it did for Congo, South Africa, Namibia, Angola, etc. Hence, the decolonization of Palestine and the stopping of Aparthied Israeli government should be her outmost priority,” he added.

The group therefore urged Nigeria to be careful and review its foreign policy goals with Israel, saying they are dishonest people who, if given one opportunity, they will want to take five, even more.

Deputy Director, MAI, Dada Yaqeen said, “At first, the Israelis were given small portion of the Palestinian lands but gradually, they started expanding, with the support of their allies, especially the US. Their creation in 1948 led to the mass exodus of about 700,000 Palestinians which led to what is known today as An-Nakbah, (the Catastrophe). Between then and now, they have stolen virtually all Palestinian lands without any meaningful step to tame it.

“We are calling on the Nigerian government to be careful in their dealings with Israel and the super powers. When you engage in any diplomatic relationship with them, don’t go to sleep. By the way, what does the country want to benefit from an apartheid regime who does nothing other than maiming and killing of innocent Palestinians? Maybe the FG should tell us what they have benefited from such relationship over the years?

“Back in History, when the super powers were discussing with Hussein Sharif, the leader of Makkah, during the time of Ottoman Empire. They promised to support him against the Ottoman. They also promised him the mantle of leadership of the Ottoman Empire which was about to collapse during the world war.

“Unfortunately for him, little did he know that they had other plans, which was to share the lands of the Ottomans among themselves. When you are relating with the super powers, the Nigerian government needs to be careful. Their interest comes first, not that of our country. If not, why are they too quick to condemn the actions of the federal government fighting against insurrectionists in the country? They are condoning and giving safe haven to terrorists to make Nigeria ungovernable,” he added.