The Punch makes u-turn, updates church demolition story to include ‘mosque, others’

The Punch online, a Nigerian daily has updated one of it’s one-sided reports earlier published online on Tuesday, June 15, with the headline ‘Outrage as FG demolishes 12 Lagos churches on alleged illegal plots’.

Nigerians, who were outraged by the misleading headline, swiftly condemned the newspaper, accusing it of using what they tagged one-sided and biased report to fuel religious crisis in an already volatile country, making it look like the Federal Government is at war with the Church, and Christianity.

They noted that the newspaper, renowned for its Islamophobia, made it looked it was only churches that were affected, whereas mosques and other structures were also involved.

However, in its updated version, the national daily subsequently included “mosque and others” which indicated that other structures, including mosques were equally demolished in the exercise.

The demolition was done by the officials of the Federal Housing Authority on Sunday as earlier reported.

Muslim News findings however revealed that despite inclusion of “mosques” and “others” in the headline, there was no mention of the affected mosques in the body of the story, even as the newspaper interviewed pastors of different churches whose buildings were affected. 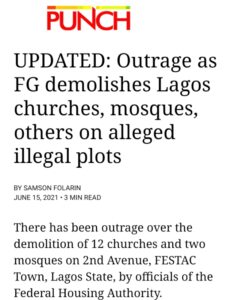 The only update in the latest report is:

No mention of mosque (1st report)

There has been outrage over the demolition of 12 churches on 2nd Avenue, FESTAC Town, Lagos State, by officials of the Federal Housing Authority.

There has been outrage over the demolition of 12 churches and two mosques on 2nd Avenue, FESTAC Town, Lagos State, by officials of the Federal Housing Authority.

Nigerians have nevertheless reacted to the update by The Punch report.

Abba Musa said, “Updated indeed. The Punch knows what it’s doing. Just to instigate to the public that the federal government is against the Christians. They knew from the onset. Set the country on fire but they must know that when heaven falls, it will definitely land on all of us. Rubbish.

Another netizen, Abe Olumide stated, “The Punch has finally given itself correct brain…thought you guys said it was Churches alone that was pulled down.
Hmmmmmm.