An active member of the Muslim Students’ Society of Nigeria, University of Lagos Chapter, Ibrahim Adedeji Alimi has emerged as the 2018/2019 best graduating student of the institution, with a cumulative grade point average (CGPA) of 4.98 out of a possible 5 points.

Alimi was declared the best graduand by the Vice-Chancellor, Prof. Oluwatoyin Ogundipe at a press briefing held on Wednesday, June 30, 2021 to officially announce the 51st convocation ceremony of the University of Lagos (UNILAG), Akoka, holding between Monday, July 5 and Thursday, July 8, 2021.

Prof. Ogundipe, while addressing the press, disclosed that 281 First Class graduands are among more than 15,000 billed to receive their certificates and diplomas during the ceremonies.

Prof. Ogundipe disclosed that the best graduand, Ibrahim Adedeji Alimi, from the Faculty of Engineering, led the pack with cumulative gradient point average (CGPA) of 4.98 out of the possible 5 points.

Alimi was an active member of MSSN, UNILAG chapter throughout his 5 years course. He participated in many of its academic and religious activities, including mentorship programmes for members of the society.

Since when he was in Year 2, Alimi has been among the resource persons at MSSN Freshers’ Week. He was also the Chairman of the Annual Engineering Freshers’ Day for his faculty.

Speaking with our Correspondent on Thursday, July 1, Alimi, who is currently serving at a private company in Lagos said being the best graduating student in the University comes with a lot of prestige one needs to be proud of.

According to him, “Everybody wants to be associated with success and the fact that you’re celebrated is a great thing. All glory be to Almighty Allah for the opportunity. I feel so elated and happy. My parents are also very proud of me and my friends as well. It’s a great thing.”

MN: Can you briefly tell us about yourself?

Alimi: My name is Ibrahim Adedeji Adedeji. I’m from Oyo state. I come from a family of six. I have 3 siblings, including my parents and myself. I am the second child of the family and I have two brothers and a sister. I spent most of my years in Ibadan. I attended Prospect International Nursery & Primary school and Oritamefa Baptist Model School, both in Ibadan. I finished in 2014 and I gained admission into the University of Lagos immediately to study Mechanical Engineering. I was sixteen when I moved to Lagos.

MN: Why did you choose Mechanical Engineering?

Alimi: To be honest, my parents and extended family thought I was going to study Medicine because I was very smart but I knew I couldn’t cope due to my fear of blood, mutilated bodies, human parts, and all the situations doctors had to face. My next option was Engineering because growing up, I loved cars and had a dream of building my own car and I also love Mathematics. So, Mechanical Engineering felt like the perfect choice.

READ ALSO...  Recep Tayyip Erdogan, an insight into the persona of the two-time winner of Muslim News Global Muslim Personality

MN: How was the five years experience at the University of Lagos?

Alimi: My five years experience in the University had it moments, the good and bad ones. Mechanical Engineering itself was very demanding and stressful right from the onset. The rigorous and voluminous lab reports is an important highlight. I was able to make new friend and families, further extending my connections. Overall, I would say it was great.

MN: You graduated with the best CGPA during the 51st convocation. How did you manage to have such high CGPA from the first year and sustain it till the last year?

Alimi: I won’t say it was easy, it was not. In my Primary school, I was always the first or second best student and in my secondary school I finished as the second best student, both which already gave me a good start. Then, my JAMB score was not as high as I would have expected. I had 205 in JAMB and getting admission into University of Lagos with 205 felt like impossible but I still got the merit list because of my excellent performance in my post UTME. I had a good foundation, coupled with the fact that I believe that whatever is worth doing at all is worth doing well. It was not like I had it in mind to be the best graduating student from the start. I only wanted to finish with a very good grade; a first class.

I attended a couple of orientations in my first year and that was where I learnt there was an endowment fund for students that made first class CGPA every year and it was N50,000. For a young boy like me, it was a lot of money and it was my motivation to do better. In my first semester, I took like 7 courses and because I prepared really hard, I had a 5.0 and also a 5.0 in second semester. I am a student that learns a lot in class so I took my classes very serious.

I am also not a fan of the library. In my entire years in the University, I visited the library only two or three times. I prefer to read in my room. Another thing that helped me was helping others. Helping my coursemates understand what we’ve been taught was a motivation to read for me. I also engaged in some extracurricular activities, but when I noticed it was becoming too much, I decided to cut it off because I knew my primary aim in the University was my academics.

MN: Let’s talk about extracurricular activities. Which one did you cut off and why?

Alimi: In my year two, I joined a couple of societies. I joined AIESEC for like a year before I was kicked out because I became inactive and this was because the meetings were clashing with the time I was supposed to write my laboratory reports and it was always very rigorous, so I couldn’t keep up. In my 200 and 300 levels, I didn’t actively take on much tasks, but I later realized that extracurricular activities were very important. Going to the university is not all about making a good grade rather, it’s about being someone who is an all-rounder and employers also prefer that their employees not only bring grades to the table. So, I took more active roles in my 400 and 500 levels. I joined Professor Ayodele Awojobi Design Competition (PAADC) and I was also the chairman for Engineering Muslim Student Society (EMSS) orientation program for the 2019 session. I also took up other minor tasks. I played football in 500 level and I represented my department in the departmental games and we won silver medal.

MN: How did being a member of MSSN assist your journey in the university?

Alimi: What I really liked about MSSN was that, it’s members are very supportive and they’re also doing very well in their academics. After the first semester in year one, the Society organised a program which I can’t remember the name now and they gave out N5,000 to those who made a 5.0 GP and they were always inviting me to programs to inspire other people and for you to always inspire others, you have to be on top of your game. MSSN UNILAG branch regularly organises success dua during exams which I don’t always miss because one has to always put Allah first.

MN: Let me take you back a bit to your family background. Are your parents rich or struggling?

Alimi: I won’t say I am from a rich home neither would I say we are poor. Let me just say we’re an average family. We’re not struggling, we’re fine. During my undergraduate studies, I also got scholarships so I could help out. My parents’ income was just sufficient for our needs.

MN: How do you think other students can also take advantage of these scholarships that you got while in the university?

Alimi: There are numerous scholarships and I think the most important thing is to be informed. Then, when you maintain a good grade, you’ll qualify for a lot of scholarships. These information are available online and also getting to know people especially from your faculty or department. Most scholarships are tailored to fit engineering students, especially the oil scholarships. Getting a good network of friends also help and I was an advocate of the scholarships I got. I was always telling people about them and advising students to apply for them.

MN: You talked about virtually everything but there was no mention of any lady. Is it that you did not go out with any lady or you just decided to leave it out?

Alimi: I am quite reserved and I had female friends but I was never in any relationship.

MN: Now that you’ve graduated what do you intend to do next?

Alimi: I intend to further my education. I’m considering a PhD in Renewable Energy or a Master’s in Engineering Management. 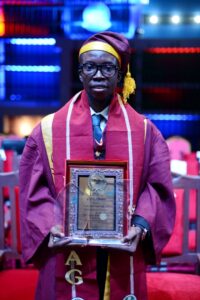 MN: Where do you like to see yourself in the next five years?

Alimi: I intend to further my education like I said. If I’m going to do a Phd, it’ll most likely last for 5 years and if it’s a masters it would take at least one year. I just want to put myself in a position where I’ll influence things and make things happen in the world.

MN: Who are the people you’ll like to appreciate for their help throughout your 5-year stay in the university?

Alimi: I have a lot, but I’ll mention just a few. Firstly, I give glory to Allah and then my parents and siblings. I remember when I had 205 in my UTME and I had almost lost hope of gaining admission, it was my siblings who encouraged me that at least I still had above 200 and I’ll be allowed to write post-utme, so, I should prepare well for that and my dad was also supportive. Throughout my 5-year stay in the university, my dad was very supportive and he calls me almost everyday to support me and check up on me, likewise my my mum, she was also supportive. If I needed anything, she was my go-to person. They played a great role in my life. My mentors and also my classmates. My classmates played a very important role. Finishing as the best graduating student was more of a priority to them than I myself. They were always pushing me and helping out in their own way. It’s great when you know the people around you want the best for you. Finally, I would like to appreciate my sponsors that is the scholarship bodies, Unilag endowment funds and others.