For 60,000 nationals from 150 countries resident within the kingdom, Hajj 2021 begins on July 18, while the rest of the world prepares for Eid-el-Adha celebration on July 20. Muslim News reports....

With this year’s Muslim pilgrimage limited to 60,000 vaccinated citizens and residents of Saudi Arabia, Al Jazeera rounds up the Muslim annual pilgrimage. 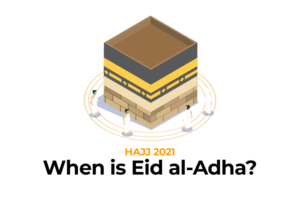 The Muslim annual pilgrimage known as the Hajj will start on July 18 with Eid al-Adha being celebrated on July 20, according to Saudi Arabia’s Supreme Court.

The Hajj is is one of the five pillars of Islam and a once-in-a-lifetime duty for all able-bodied Muslims to perform if they can afford it. Before the pandemic, some 2.5 million pilgrims would descend on Mecca for the five-day long Hajj.

Due to the coronavirus pandemic, no foreign pilgrims will be allowed to perform the Hajj once again this year after Saudi Arabia restricted the annual pilgrimage to a maximum of 60,000 vaccinated citizens and residents between the ages of 18 and 65. In 2020, only up to 10,000 Saudi citizens and residents were permitted to perform the annual pilgrimage. 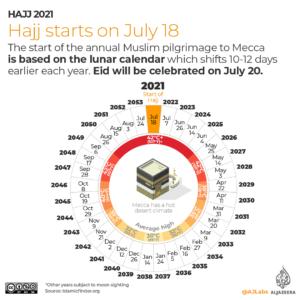 Hajj falls on the 8th of Dhul al-Hijjah, the twelfth and final month in the Islamic lunar calendar which shifts 10-12 days earlier each year. This means that the next time Hajj will start after July 18 will be in the year 2054 – 33 years from now.

Mecca is known for its hot desert climate with temperatures regularly exceeding 42C (107F) in the summer months. It will be at least another 10 years until the average high temperatures will be below 38C (100F).

Eid al-Adha or the Feast of Sacrifice, is celebrated on the third day of Hajj and lasts for three days. This year Muslims worldwide will celebrate Eid on 20-22 July. Eid al-Adha is the second major Muslim festival after Eid al-Fitr, which marks the end of Ramadan, the month of fasting. 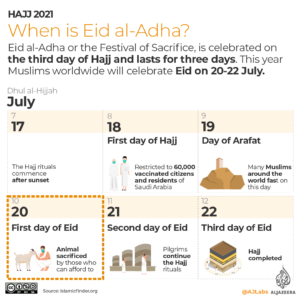 How is Hajj performed?

For Muslims, the Hajj re-enacts the actions of the Prophet Muhammad in his “farewell pilgrimage” in 632 AD which traces the footsteps of the prophets Abraham and Ishmael through the Arabian desert. It is a central pillar of the Islamic faith meant to cleanse followers of sin and bring them closer to God.

We take a look at the step-by-step process in the infographic below. 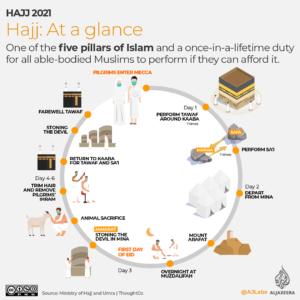