by Muslim News Nigeria
in World
0

Leaders from around the world offered festive greetings to Muslims on Tuesday as they celebrated Eid-Al-Adha.

In his message marking the holiday, the president of Turkey, President Recep Tayyip Erdoğan said on all his social media handles that he hoped the bayram (festival) would bring peace to the world.

“I pray to God for the holy Qurban Bayram to bring health and peace to our people, to Muslims across to the world and to all of humankind,” Erdoğan wrote on Twitter. 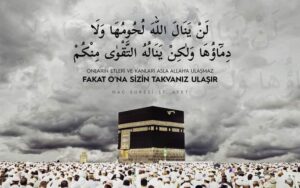 Also, Saudi Arabia’s King Salman said on Twitter that his country was honoured by God to be the custodian of the two Holy Mosques and to serve pilgrims every year.

“We thank God Almighty who has honoured us with the service of the two Holy Mosques, and that is the greatest of blessings that God has bestowed upon us,” he said.

“And with the advent of the blessed Eid Al Adha, we ask God to remove all harm from us and the world, and we hope for good in the coming days.”

Eid Al Adha, or “the Feast of Sacrifice,” is typically marked by communal prayers, large social gatherings, the slaughtering of livestock and the distribution of meat to poor people.

This year, the spread of the Delta variant of the coronavirus prompted some countries to introduce restrictions.

Others appealed for people to avoid congregating and reminded them to follow safety protocol.

Canadian Prime Minister Justin Trudeau released a statement saying this Eid would be particularly special, with widespread vaccination enabling many people to gather with loved ones and friends at last.

“If we continue to follow public health guidelines and get our Covid-19 vaccines as soon as it’s our turn, we will beat this virus and will be able to celebrate together next year,” he said.

“To everyone celebrating: Eid Mubarak!”

Tonight, across the country and around the world, Muslims are coming together and observing Eid al-Adha. To everyone celebrating: Eid Mubarak! — Justin Trudeau (@JustinTrudeau) July 19, 2021

The US also tweeted to Muslim communities around the globe.

“We wish a happy Eid al-Adha to all who are celebrating in the United States and around the world. May your time during this holiday be filled with the values of sacrifice and charity,” the State Department said.

We wish a happy Eid al-Adha to all who are celebrating in the United States and around the world. May your time during this holiday be filled with the values of sacrifice and charity. — Department of State (@StateDept) July 19, 2021

UK Prime Minister Boris Johnson was also keen to offer his Eid greetings to “Muslims celebrating here in the UK and across the world”.

I would like to wish Muslims celebrating here in the UK and across the world a joyous and blessed Eid al-Adha. #EidMubarak — Boris Johnson (@BorisJohnson) July 19, 2021

Indonesia, the world’s most populous Muslim-majority nation, is batting a devastating new wave of coronavirus cases.

Its vice president Maruf Amin, who is also an influential Islamic cleric, appealed to people to perform holiday prayers at home with their families.

“Don’t do crowds,” Mr Amin said in televised remarks before the holiday. “Protecting oneself from the Covid-19 pandemic is obligatory.”

The surge is believed to have been fuelled by travel during the Eid Al Fitr festival in May and by the rapid spread of the Delta variant.

In Malaysia, measures have been tightened after a sharp rise in infections despite a national lockdown since June 1.

People are barred from travelling back to their home towns or crossing districts to celebrate. House visits and customary trips to cemeteries are also forbidden.

Sydney resident Jihad Dib, a New South Wales state government politician, said the city’s Muslims were sad but understood why they would be confined to their homes with no visitors allowed.

“It’s going to be the first Eid in my life I don’t hug and kiss my mum and dad,” Mr Dib told the Australian Broadcasting Corporation.

In Iran, a week-long lockdown came into effect in the capital, Tehran, and the surrounding region. The country is struggling with a surge in coronavirus cases, state media reported.

In Bangladesh, however, authorities have allowed an eight-day pause in the country’s strict lockdown for the holiday. Health experts say this could be dangerous.

In Egypt, Essam Shaban travelled to the southern province of Sohag to spend Eid Al Adha with his family. Before the holiday, he said he planned to pray at a mosque there on Tuesday while taking precautions such as bringing his own prayer rug and wearing a mask.

“We want this Eid to pass by peacefully without any infections,” he said. “We must follow instructions.”

In Saudi Arabia, pilgrims returned to the Grand Mosque in Makkah from the Muzdalifah plains early in the morning to start the Jamarat stoning of the devil ceremony.

The Hajj pilgrimage is one of the five pillars of Islam and a must for able-bodied Muslims with the means to travel at least once in their lifetime.

It is usually one of the world’s largest religious gatherings, but owing to the pandemic it is open to fewer pilgrims for the second year running.

Pilgrims converged on Mount Arafat, where it is believed the Prophet Mohammed delivered his final sermon, for the most important of the Hajj rituals.

The mask-clad faithful camped in the Valley of Mina on Monday.

– The National News and Daily Sabah