The Minister of Communications and Digital Economy, Dr. Isa Pantami has launched Fifty (50) Naira Revenue Stamp duty for the authentication of lawful transactions in Nigeria.

Dr. Pantami while unveiling the revenue stamp at the NCC Digital Complex, Abuja, vowed not to only unbundle but transform the Nigeria Post Service (NIPOST) into a world class postal service.

“We thank God that we were victorious at the end of the day on the issue of who collects stamp duty. I thank President Muhammadu Buhari, the National Assembly and all stakeholders for their immense support to the Ministry and NIPOST.

“The unveiling of the N50 revenue stamp is the beginning of the transformation of NIPOST. We have recorded modest achivement in NIPOST that will increase its revenue and raise monies for other sectors of the Nigerian economy”.

Dr. Pantami assured that “Part of transforming NIPOST in the pipeline is to unbundle NIPOST. This include NIPOST Property development Company; this is a company that will bring all the NIPOST Properties together and develop them and generate revenue from them.

“We also have in mind the Transport and Logistics Company, a Courier Service and a Microfinance Bank. We will do the best we can before the year ends to ensure that the slot are achieved” the Minister said.

Pantami tasked the staff of NIPOST to double efforts aimed at increasing revenue generation for the country, as that would be the only justification for increased welfare package.

“You must increase your revenue generation before you ask for increased welfare as that will be a justification for you to ask” Pantami said.

With the launch, Nigerians are enjoined to affix the Revenue Stamp to denote and authenticate their receipts, documents or any lawful transactions.

Also speaking, the Chairman, Board of NIPOST, Maimuna Abubakar expressed joy that the dust was settled with the signing into Law of the Amended Finance Act, 2020 by President Buhari.

“NIPOST is back to its legal position of administration of Stamps: as the exclusive producer and custodian of stamps in Nigeria. There is no need overstating the obvious which is that NIPOST stamps have been unquestionably used since time immemorial as the only instrument for denoting duty. Today’s event is a testament that NIPOST is finally free from all forms of constraints (legal and fictional) to execute its mandate. But the truth is that we couldn’t have achieved this alone”, she added.

The Board Chairman recalled that she had “warned before that under our watch we won’t allow NIPOST to be exploited.

“We are all living witnesses to an attempted hostile takeover of our core statutory mandate which is the issuance of stamps. I dare say that it was not just a conspiracy but a massive gaslighting campaign that tested our collective resolve. Stamps not produced by NIPOST were launched. I found it shockingly ludicrous that the gaslighting campaigners even thought I should be invited to attend the burial ceremony of NIPOST (to attend the luncheon of their stamps). Now we can laugh over this, but then, it was by no means a joke.

Abubakar explained that “What was even more horrendous was the level of uppity with which the campaign was waged. We had to deal with this campaign which had nothing to do with advancing President Buhari’s agenda other than promoting organizational greed.

“We had to go beyond call to duty to summon our patriotic spirits in order to stem this campaign as not doing so would have amounted to betraying the confidence reposed in us by Mr President. It would not have been fidelity but apostasy to the Nigerian creed to have helped in the liquidation of an iconic national institution that Mr President graciously put us in charge. I am glad that in the end, it was heroism not quest for heist that won the day”, she added

NIPOST plays an important role to the economy

Earlier, in his welcome address, the Postmaster General, Nigeria Postal Service (NIPOST), Dr. Ismail Adebayo Adewusi said, NIPOST over the years has played strategic role in the socio-economic and political spectrum of our economy.

Dr. Adewusi said, “from times past, few revenue stamps have been issued. The first Revenue-Only Stamps were consular stamps of the Niger Coast Protectorate and Southern Nigeria Protectorate. Nigeria also issued Passage Service Charge Stamps in 1980 and a Stamp Duty Stamp in 2006. In tandem with the laws of the land, NIPOST today, sets out to unveil a set of adhesive Revenue Stamp that are of economic value”, he said. 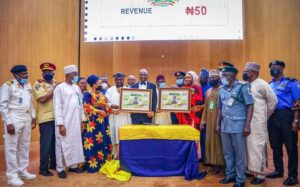 He said, the newly launched “Revenue Stamps, which come in a single denomination of ₦50, will be made available in our post offices nationwide”.

The Postmaster General maintained that one of the statutory responsibilities of the Nigerian Postal Service (NIPOST) is the issuance of Stamps, including Revenue Stamps.

“Stamps have been used in Nigeria since 1874, when Nigeria pioneered the production of Stamps with the issuance of what was then known as the Stamps of Lagos. The use of stamp is not limited to payment of postal services alone. Stamps also serve as objects of visual communication and as a dependable recorder of events for posterity,” he said.

He reiterated that “Through stamps, NIPOST has documented Nigeria’s history, educating and preserving our national heritage among others. To describe NIPOST as a pride of immense value is not only appropriate to the Nigerian public, but also to the international community”.