A combination of media aides and social media associates on Tuesday celebrated the 52nd birthday of Borno State Governor, Prof. Babagana Umara Zulum, with the launch of “Second Verdict”, which is a compendium of published news, analyses, features, columns, commentaries, discourse editorials, selected speeches and score card, in the Governor’s second year.

The 331-page compendium with over 300 articles, structured in 17 thematic sections, was unveiled by Zulum’s Chief of Staff and Publisher of the Compendium, Prof. Isa Hussaini Marte, at the Government House in Maiduguri. 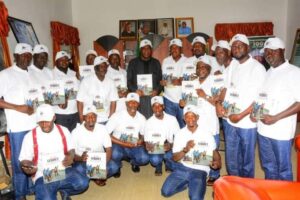 Leading members of the editorial board to present copies to the Chief of Staff, the Governor’s Senior Special Assistant on Media, Babasheikh Haruna, revealed that the compendium, which was second in series, had been ready since July, but the editorial board, led by Editor-in-Chief and Special Adviser on Public Relations and Strategy, Malam Isa Gusau, agreed to delay the public presentation till August 25, to coincide with Governor Zulum’s 52nd birthday.

He explained that the decision was taken at a July meeting in Maiduguri, that was chaired by the Editor-in-Chief, Malam Isa Gusau. Even though Gusau knew he was going to miss the public presentation, as he was due for return to a University in UK, to round up a post-graduate programme he began in September last year.

Babashiekh, who is the compendium’s deputy editor, noted that the editorial members thought of the presentation as their own way of honoring a Professor with the release of a valuable compilation that documents Government’s policies, programmes and projects, and chronicles events in ways that will be useful for readers.

The compendium’s editorial adviser and consultant editor, Dr. Sharafa Dauda of the department of Mass Communication at the University of Maiduguri, in his remarks, gave details of the compendium’s entire structure, recalling that it took one year to plan, gather articles, sort them according to their timelines, structure them into sections, edit and plan them into pages with accompanying photos. 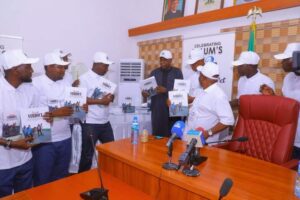 Unveiling the compendium, Zulum’s Chief of Staff, Prof. Marte, commended the Governor’s media aides and social media associates for working round-the-clock throughout the year, to produce a second compendium, which was modeled after the “First Verdict”, that was released in August 2020.

“Leadership is leading right from the front and taking people who cannot afford one square meal to prosperity and this, as you all have seen in the last two years, is Professor Zulum’s creed. The Governor is a leader that is really passionate about uplifting the lives of Borno people, placing public interest first, in all his decisions” the Chief of Staff said.

Speaking on Zulum’s media aides and social media associates, Prof. Marte said, “you guys have done a great job. I am with you, and I support you”.

On his part, Borno’s Chairman of the Nigeria Union of Journalists (NUJ), Comrade Bulama Talba, who represented all journalists in the State at the event, thanked the Editorial Team of the Compendium and lauded the cordial relationship between the Borno State Governor and the NUJ and journalists in Borno State, saying “it is the most successful in the history of Borno State”

The compendium documented articles published by journalists on Zulum’s humanitarian engagements, issues of security, education, healthcare, strategic planning and development partnerships, budget and economic planning, housing and infrastructure, transport, governance and politics, the workforce, honours and awards, newspaper editorials, and wide range of comments by columnists and other persons in relation to the Governor and issues relating to Borno State. 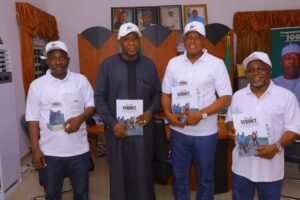 The compendium documented some activities of the Deputy Governor of Borno State, Umar Usman Kadafur, with special focus on his period as Borno’s First Acting Governor, following Governor Zulum’s transfer of power to him in April 2021. It also captured the Borno First Lady, Dr. Falmata Babagana Umara Zulum and her the Multi-Aid and Charity Initiative, which focuses on women and girl child rights.

The “Second Verdict” was dedicated to resident journalists and social media promoters as well as many other media supporters of the Governor.

The “First Verdict” which had 299 pages, was publicly presented at a well attended function chaired by Governor Zulum on August 17, 2020, at the multipurpose hall of the Government House in Maiduguri.