A week after unveiling its N200m ultra-modern hostel and classrooms for the Lekki Qur’an Memorisation College, the Lekki Muslim Ummah, an umbrella organisation of all Muslims in Lekki Peninsula of Lagos State, has graduated seven teenage Qur’an memorisers amidst pomp and pageantry.

The graduands, who have been certified for successfully memorising the entire chapters of the Holy Qur’an are also said to be grounded in the knowledge of Hadith, Fiqh, Arabic and other aspects of Islamic theology as part of the college curriculum.

Speaking at the well-attended convocation ceremony held at the Lekki Central Mosque Hall, the Founder of ZamZam Academy and lecturer at the Adeniran Ogunsanya College of Education, Dr. Salaudeen Munirudeen Ar-Riyaadhy congratulated the parents of the graduands for the feat, saying they have successfully secured a better future for their children.

“Secondly the Prophet (PBUH) said, on the Day of Resurrection, the Qura’an memorisers will be invited and Allah will decorate them with a golden crown and their parents will also be decorated as well. The parents will be surprised and ask why they are distinguished and honoured, and they will be told that it is because they sponsored their children to memorise the Holy Qur’an.” 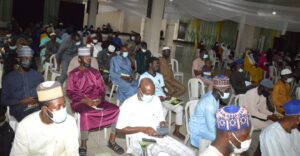 “Majority of them will not be Imam in future. We have some of them who want to be engineers, doctors, lecturers, which are different from an Imam who is always reading the Holy Qur’an”

On his part, the College Director, Imam Ridwan Jamiu said that it had been rightly observed that science without religion is blind and religion without science is lame. He described science as the methodological and analytical study of the signs of Allah in nature and creature, with a view to benefiting human here and in the hereafter.

Imam Jamiu, who is also the Chief Imam of Lekki Central Mosque, said that if Muslims must claim their lost glory, they must turn to the Qur’an, its memorisation and study the application.

Other speakers at the colourful event urged parents of the graduands to endeavor to take necessary precautions to ensure the graduands don’t forget what they memorised.