The 2-in-1 event held which physically in Lagos, Southwest, Nigeria on Saturday, September 18 and was streamed live globally, also featured the presentation of awards to winners of Global and Nigerian Muslim Personalities of the Year 2020.

The Tunisian-born, UK-based activist who emerged Global Muslim Media Person of the Year 2020 said Muslims have been subjects of framing in the media such that any positive news about them is no news; while negative news about them are wildly spread.

The media entrepreneur gave a practical illustration of media framing as he narrated an incident that happened to him with the BBC after the November 2015 bombing in France, which led to the death many civilians.

“They called me and asked me to take part in a debate on a live show at the BBC studio. I agreed with them and everything was arranged, including the transport and all.

“While the arrangement was on, they asked me, ‘by the way, what do you think of what happened?’ I told them what happened is a heinous crime because it’s against civilians. And, that was the end of it. No cab was there to pick me up, no participation, nothing again! Because they thought I was going to come to the studio and call them kafir (unbelievers), who deserve to be killed. When they didn’t get that type of answer, which was what was on their mind, they didn’t invite me again,” he said.

While thanking Muslim News for the award and the Nigerian Muslim community for the opportunity to speak at the event, he said, “It’s a given wisdom nowadays that news about Muslims, if it is positive, is not news. But if it is negative, it is news. 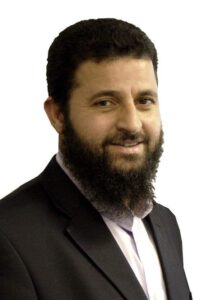 “One of the best approaches to curbing media framing of Muslims, according to Ali Harrath is to know what the media want and not give it to them, saying, it’s very simple. ‘The message is very clear. What they want, we know it. Should we give it to them, absolutely no!’ This is the way forward for us.”

On adopting the Prophetic approach to
curbing negative and adversary media, Ali Harrath cited two incidents during the time of Prophet Muhammad (SAW).

He said, “First, one of the hypocrites said when we go back to Madinah, Muhammad (SAW) will be humiliated and kicked out because I am the leader of Madinah. Umar (RA) sought the Prophet’s permission to punish the hypocrite, but he (SAW) said to him, don’t do that. Umar asked why? He (SAW) said, the people will say the Prophet is killing his companions.”

“This hypocrite isn’t one of his companions, but the negative media back then will paint it in that manner. The Islamophobic media would have reported that he claimed to be a Prophet, yet killing his companions, a criminal act that no one among the Prophets who came before him had done.

“The second occasion, when Prophet Muhammad (SAW) was victorious in Makkah. He got back and told Aisha (RA) that if it wasn’t for the people of Quraysh who just embraced Islam, I would have demolished the building of Ka’bah and rebuild it again as it was before.

According to him, If you look at the Ka’bah today, it’s from the name muka’ab meaning a cubic shape, but in reality the shape of Ka’bah isn’t cubic and if you have seen it before or seen it in pictures, you can see something like a small ark outside the Ka’bah. It’s called Hijr-Ismail, a low wall originally part of the Ka’bah. That’s why when we do tawaf, we go around both.

Ali Harrath said this is because when Prophet Abraham built it, he built it on rectangular shape and before Islam, the Ka’bah was demolished during a flood. It was then rebuilt partially because they didn’t have enough money to pay the people that will bring the stones. So they built it on the shape we have today.

“And the Prophet (SAW) told Aisha (AS) that if it wasn’t for the Quraysh, I would have demolished it and rebuilt it just as it was before,” he noted.

Continuing, the CEO, Islam Channel said, “Then during the time of Abdullah ibn Zubair, he said the reason the Prophet gave for not demolishing and rebuilding the Ka’bah was because the people of Quraysh just joined the new faith. So, he said we are no longer under the situation since we have joined the faith long time ago. So he demolished it and rebuilt it.

“Then, Hajjaj ibn Yusuf came and said Abdullah ibn Zubair doesn’t know better than the Prophet (SAW). He therefore decided to put it back as it was during the time of the Prophet (SAW). So he put it there and it was like that until the time of Al-Monsoor, who wanted to change it again but Imam Malik (RA) told him not to change it so that the Ka’bah doesn’t become a game between rulers. Since that time, Muslims around the world have enough money, in millions to rebuild it, but we kept it as it is. Why? So that people will not say this religion demolishes the Ka’bah.

“The lesson here is that it is not everything that is right we do. It is not enough for our deeds to be correct, legal, accepted. What is important is the objective and what we will get at the end. What is the message? Is there anyone out there looking for our mistakes?

“This is the Prophetic method of approaching the media. This is how we should be dealing with them. We have to know what they are looking for, without giving it to them. I give you a small story – this is a personal story. In the United Kingdom, there’s no single media TV, radio or newspaper that didn’t write about me. Vilifying, like unlimited attacks.

“In one of the programmes, Panorama, a famous program in the BBC, they contacted me but I refused to go. When they insisted, I went there at the end of the day, but before I went, I had a good friend of mine, an English journalist, a right-minded person, he advised me to seek advise from a media consultant.

“So I went with another guy who said to me you know what? No one out there is looking for truth. They have a script and on that script they have objective and the objective is to say Muslims are terrorists, Muslims are extremists. This is the message they want to achieve. In the script, they want someone to say this, someone to say that. So they picked me up to say what they want me to say. They are playing a game.

“I went there and the interview was scheduled for 10am and we both agreed that it won’t last more than 10 minutes, but it went on for 75 minutes. That’s about 1 hour 15 minutes. From that, they couldn’t get anything more than 90 seconds – just 1 minute and a half. Why? Because every single question he puts to me, I asked myself: What does he want from this question? What exactly does he want to achieve? And I give him the opposite answer. I don’t care about what I think, but I start thinking what he thinks. Whatever he wants I don’t give it to him. They are not asking simple, normal question. What they want us to do is play the game along. The message is clear and simple, Muslims should be ashamed of their past and should be apologetic about it,” he said.

Making reference to the American two-decade ‘war on terror’, Ali Harrath said, “For 20 years, more than 50 nations come together, killing day and night. NATO forces killing the Afghans like rats. And when the Talibans took up the capital without fighting, without firing a single bullet, all they start to talk about is human rights, the rights of woman, this and that.

Ali Harrath lamented the fact that Muslims do not invest in media, saying this makes them to become weaklings in the media industry.

“Another thing is, we Muslims do not invest in media. We aren’t powerful in the media. We don’t have much, even the money that is put in the media is from the government to make dictators look good. That’s what is happening within the Muslim world.