The feat ensured he overtook former captains Joseph Yobo and Vincent Enyeama who retired after 100 caps for Nigeria. 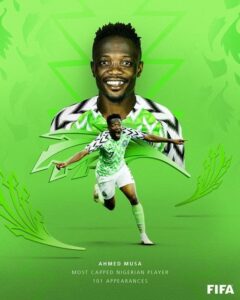 Ahmed Musa made his debut for Nigeria against Madagascar in a 2012 Africa Cup of Nations qualifier on September 5, 2010, coming in as a 75th minute substitute for Mikel Obi in a game the Eagles won by 2–0.

The former Kano Pillars winger is the fastest player of the three centurions to reach 100 caps, achieving the feat after 4050 days.

Musa, a philanthropist and role model to many youths was named Nigerian Muslim Celebrity of the Year 2020 by this medium.