The Muslim Lawyers Association of Nigeria (MULAN) has commended the The Chief Judge of Lagos State Judiciary, Justice Kazeem Alogba for the recent designation of the Ifako/Ijaye customary court for the hearing of Islamic personal laws.

The commendation came on Friday, October 15, during a courtesy visit to the Chief Judge by the Muslim Lawyers body led by its National President, Prof. Ibrahim Abikan.

MULAN extolled the Chief Judge for his courage on the initiative, noting it is a promotion of inclusive justice system and access to justice that will engender confidence in the judiciary.

By this development, the Ifako/Ijaye customary court can now hear Islamic personal laws involving Muslim marriages, divorce, maintenance and custody of children, inheritance, among others.

In his presentation, MULAN National President, Prof. Abikan urged the Chief Judges of other states of southern Nigeria to borrow a leaf from the initiative of Lagos State for a more inclusive justice sector and national integration.

For his part, the Lagos State Chief Judge thanked MULAN for the visit and intervention on critical national issues.

According to him, the Lagos Judicial Service Commission under his leadership was encouraged to take the initiative by the need to be fair to all, while operating within the extant laws.

He urged MULAN to shop for professionals versatile in Common and Islamic Law as he strives to ensure that such access is available in all judicial divisions of the state.

The Chief Judge charged the Lagos Branch of MULAN to encourage its members to show interest in the state judiciary for appointment to the High Bench.

Muslim News findings revealed that the designation happened in June, 2021, but didn’t gain media prominence until July, when the Chairman, Oyo Muslim Community, Alhaji Kunle Sanni wrote to create awareness about it.

Alhaji Sanni described the move as a silent revolution to their many years of advocacy for official implementation of Shari’ah in Yorubaland.

He said, “The news occured two weeks ago. The fact that it was uncelebrated by Muslim activists and scholars in the southwest to a discerning mind is mind-boggling.”

According to him, “The Lagos state government under the suzerainty of a Christian personality, Mr Babajide Sanwoolu approved the use of Ifako/Ijaiye customary court for the adjudication of civil aspect of Shari’ah, ostensibly as a test run before a separate Shari’ah court is established. This could be seen by some Muslims as a kind of tokenism, bearing in mind that we have eight customary courts in Lagos state.

“The obvious fact is that the journey of a thousand kilometres starts with one step. This watershed would, in shaa Allah lead to a floodgate of demands from many Muslims in other states for the official implementation of Shari’ah. 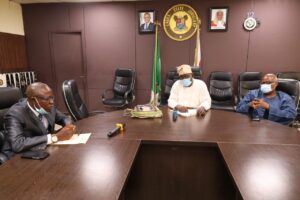 “Some may be wondering if the constitutional due process was followed. Barrister AbdulHakeem AbdulLateef, an outstanding Islamic scholar, aka Hon. Iyepe and the former commissioner for Home Affairs in Lagos state is the hero of this revolution. When he was a member of the House of Assembly, he got the bill approved without much hue and cry from our traducers who love to hate Islam,” he added.

Meanwhile, MULAN President also told Muslim News that his Organisation has received a formal request from Zumuratul Jamiu Mumin to intervene on the imminent threat to their social existence, especially plot by the FG to evacuate them from their land at Islamic City, located at Pakuro-Lotto axis of Lagos-Ibadan expressway.

Muslim News had chronicled how a plan by the Federal Government through the Ministry of Works to construct an interchange that will affect the livelihoods of Muslims occupying the only thriving Muslim community in between two Christian communities.

There have been allegations that the plan is deliberate to wipe out the Muslim community considered a threat to two Christian groups (Deeper Life Bible Church and Redeemed Christian Church of God) it shares geographic bonds with.

In a letter jointly signed by the Chief Imam and Secretary of the Islamic City, dated 10th October 2021 and addressed to MULAN President, Zumuratul Jamiu Mumin (ZJM) has asked MULAN to come to their aid.

The President has therefore directed the association’s first Vice President, Dr. Kazeem Olaniyan to coordinate a preliminary investigation of the issue along with the Chairmen of her Lagos and Ogun branches and report within one week.