An high court in Osun State has granted an injunction barring the office of the Nigerian inspector general of police and other security operatives from arresting the leader of the Academy of Islamic Propagation (ACADIP), an Islamic institute that engages in comparative religious studies, Mallam Yusuf Adepoju, and another cleric, Mudathir Kewudirorun.

The interim order, a certified true copy of which this newspaper obtained and dated November 22, 2021, is pursuant to an application filed at the court by the counsel to the clerics, Mallam AbdulFatai AbdulSalam. 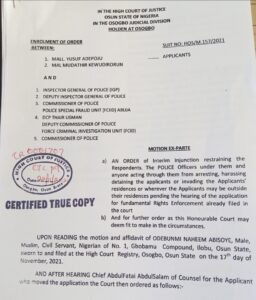 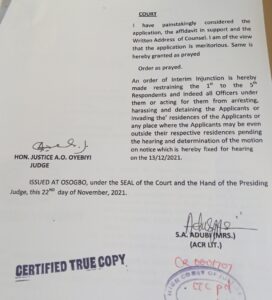 According to the ruling, the court said the applicant had sought “an order of Interim Injunction restraining the Respondents. The POLICE Officers under them and anyone acting through them from arresting, harassing detaining the applicants or invading the Applicants’ residences or wherever the Applicants may be outside their residences pending the hearing of the application for fundamental Rights Enforcement already filed in the court, and for further order as this Honourable Court may deem fit to make in the circumstances.”

The judge, A. O Oyebiyi, while granting the application noted that having painstakingly considered the application, the affidavit in support and the written address of counsel, “I am of the view that the application is meritorious. Same is hereby granted as prayed.”

Mr Adepoju had alleged that operatives of the Nigerian police had in gestapo-like manner ‘swooped’ on his home in Ilobu, headquarters of Irepodun Local Government Area of Osun State at about 3a.m on November 16 to arrest him.

According to the cleric, though he was not at home, his family members were subjected to tortuous experience in the dead of the night.

Earlier in a statement issued on the matter by one of the cleric’s counsels, Kabir Akingbolu, a principal partner of Salawu, Akingbolu & company, had narrated the ordeal of Mr Adepoju, noting that there was no basis for such an alleged threatening approach by the police.

Mr Akingbolu wrote; “Like a thief in the night, on Tuesday, 16th, November, 2021, the house of this Islamic scholar was besieged by people suspected to be either from The Nigerian Police or DSS around 3am. Though Adepoju was lucky not to be around when the ‘visitors’ came, he obviously got the message in the hard way through the emotional torture inflicted on members of his family.

“Few hours later, precisely around 5p.m in the evening, when Mallam Yusuf thought the siege was over, the visitors returned, this time in a military commando manner, armed with a letter of invitation from the Office of the Commissioner of Police, Police Special Fraud Unit (FCIID), Abuja.

“In the letter of invitation, it was stated that the office was investigating alleged case of Defamation of Character/Character Assassination, where Mallam Yusuf was allegedly featured.”

According to the lawyer, the letter which was dated 16th of November and signed by one Tahir Usman, a Deputy Commissioner of Police, had also read in part; “In the light of the above, you are requested to interview the Deputy Inspector General of Police through the Deputy Commissioner of Police, Special Fraud Unit, Force Criminal Investigation Department, Area 10, Garki, Abuja on 24th November, 2021 at 1100hrs for clarification on the alleged case.”

But Mr Adepoju said he was unaware of any case of defamation involving him and anyone and wondered what could have informed the “hide and seek” being played by the police to arrest him when he had never been invited for any of such cases before now.”